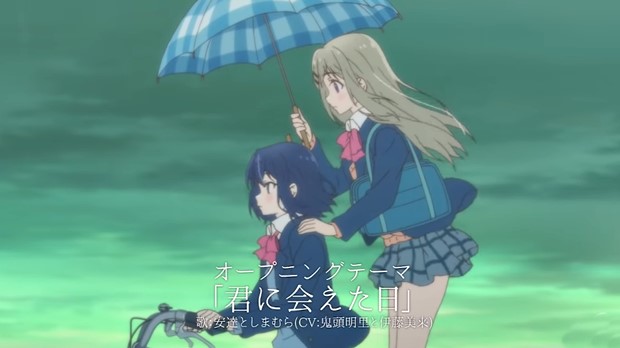 I must say I’m a sucker for Japanese yuri anime even though I am totally straight.

Because, come on, how cute is it to watch junior high and high school girls finding their first loves and all the complications that often entails?

That upcoming new anime series just got another key visual (see below) and a new trailer today — its third one — and man, is this thing cute!

The latest Adachi to Shimamuru trailer shows the beginnings of  Adachi’s romantic attraction towards Shimamuru, and how lovely of a friendship the girls have together even before it.

It also informs us the new series will be premiering on October 8th/9th in Japan.

Adachi to Shimamuru is being directed by Satoshi Kuwabara (Dagashi Kashi 2, Astro Boy: Shinsen-gumi), character design is by Shizue Kaneko (How NOT to Summon a Demon Lord), with Keiichirō Ōchi handling series composition.

Watch the latest Adachi to Shimamuru trailers below, with both English and Japanese subtitles.

The artwork is hazy, romantic and beautiful, character design is lovely and Adachi to Shimamuru looks like it may just be one of the best yuri anime out of Japan in quite a while.

Mark your calendars as it will begin streaming on Funimation in October.