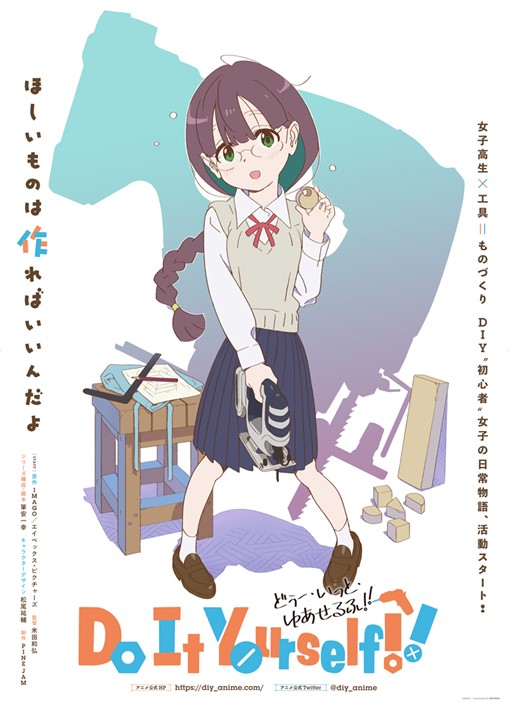 Fans of the cute girls doing cute things anime genre including myself, have been looking forward to the upcoming Do It Yourself!!! for a while now.

The show is a new anime featuring adorable girls doing adorable things, with some of the sweetest looking girls I have seen in an anime in a while.

One of the sweetest girls yet is Do It Yourself!!!‘s Takumi Hikage.

She just got her own character visual and key visual today and, from the looks of it, with her glasses and her cute uniform, she will be one of my favorites when the series premieres later this year.

Do It Yourself!!! is set in Sanjo City in Niigata Prefecture, and follows a group of high school girls who join their school do-it-yourself club so they can learn how to build and fix things.

Whether it’s a bookshelf, a desk or a rabbit hutch, these girls are happy to grab their drills and get to work. 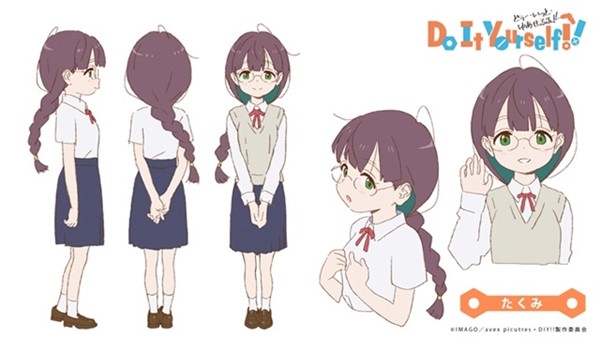 As for Takumi, she is said to be a quiet, shy girl who isn’t particularly interested in do-it-yourself, but got involved with the DIY Club at the request of another girl.

But, once she gets started, she tends to be dedicated to her work.

Check out Takumi Hikage’s character visual below, and her new key visual above.

Do It Yourself!! is being directed by Kazuhiro Yoneda (Gleipnir) and produced by PINE JAM (Gamers!)

New Do It Yourself!! key visuals feature Serufu Yui — with all her cuts and bruises, she’s still cute