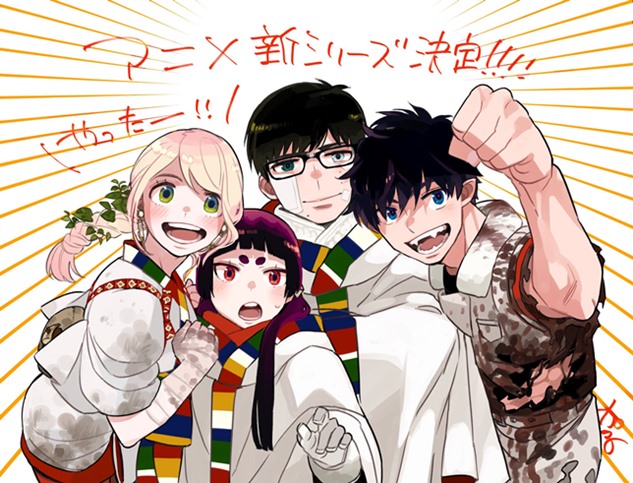 The Blue Exorcist manga series has been so popular since it was launched in Jump SQ in 2009, it quickly spawned two anime series, a full-length film and several stage plays in Japan.

So, for fans of the dark fantasy manga, it probably is not that surprising that a new Blue Exorist anime has just been announced as already in production.


The announcement came during Jump Festa 2023 in Tokyo, Japan this weekend, and even encouraged Blue Exorcist mangaka Kazue Kato to release a celebratory visual via his Twitter account with the comment “It seems you can make an anime again”. (see below)

Blue Exorcist by Kazue Kato has been such a major hit for the mangaka, there are currently more than 25 million copies in circulation worldwide and 28 volumes in Japanese already published.

The manga is also being published in English via Viz Media, with 27 volumes published. They have this to say about the plot of the first volume of the series:

Raised by Father Fujimoto, a famous exorcist, Rin Okumura never knew his real father. One day a fateful argument with Father Fujimoto forces Rin to face a terrible truth—the blood of the demon lord Satan runs in Rin’s veins! Rin swears to defeat Satan, but doing that means entering the mysterious True Cross Academy and becoming an exorcist himself. Can Rin fight demons and keep his infernal bloodline a secret?

It won’t be easy, especially when drawing his father’s sword releases the demonic power within him!

No word yet on when the new Blue Exorcist anime will premiere, who stars in it or who is directing it. We will let you know as soon as we find out.