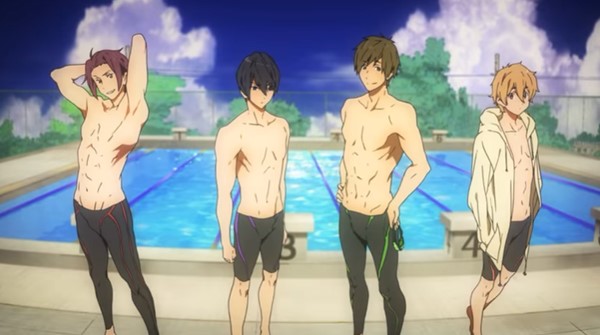 Kyoto Animation has just released another gorgeous key visual for the upcoming Free!–the Final Stroke– Part 2 movie due to be released in late April, 2022.

A Free!–the Final Stroke– Part 2 key visual featuring the stunningly beautiful Haruka Nanase getting ready to dive into the pool but looking suggestively back over his shoulder one last time before he does.

And yep, Haruka is and will always be my main boy in that fabulous sports anime series. Like most of us, right?

Free!–the Final Stroke–Part 2 is the follow up to last month’s release of the first film in the two-part movie series. Movies that, sadly, herald the end of this long running and much loved anime.

The movies were scheduled to release alongside the Tokyo Olympics 2020 but, after the tragic arson attack at Kyoto Animation that killed a huge number of the studio’s employees, the release of both films was delayed by almost two years.

Alongside today’s release of the latest beautiful Free!–the Final Stroke– Part 2 key visual, the anime studio also released a retrospective trailer that gives us a great reminder of just how wonderful this amazing series has been.

Check out the new Free!–the Final Stroke– Part 2 key visual up above, and watch that trailer below.

Free!–the Final Stroke– Part 2 itself releases on April 22, 2022 in Japan and probably soon after in the west, and then we will finally, and oh so sadly, have to say goodbye to Haruka and his friends.

Meanwhile, watch or re-watch all three seasons of Free! on Crunchyroll.