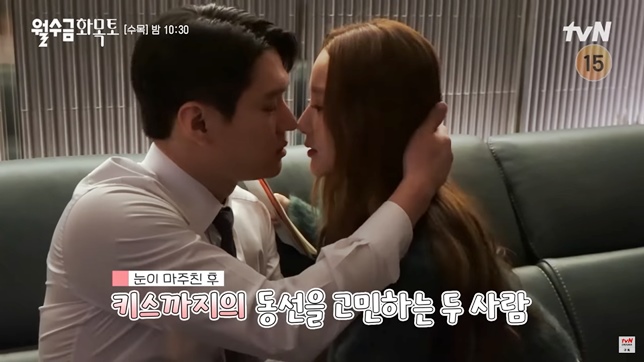 After binge-watching 12 episodes of the new Korean romantic comedy Love in Contract this weekend, I went in search of promotional videos about the popular drama to see if I could get more clues about who Choi Sang Eun (played by Park Min Young) will end up with. (Praise God it’s not Kang Hae Jin, eh?)

And I stumbled across this — a cute behind-the-scenes video from Korean network tvN’s official YouTube channel showing how some of the scenes from the last two episodes of the popular K-drama were filmed.

A kiss the two actors worked out together before it was filmed.

Should that scene begin with a passionate kiss or a small peck?

Park Min Young favored the peck, whereas Go Kyoung Pyo was ready to go in for the real thing.

Other things discussed were where the pair’s hands should be as they kiss.

Should Jung Ji Ho run his fingers through her hair? What about Jung Ji Ho’s tie? Should Choi Sang Eun take it off? 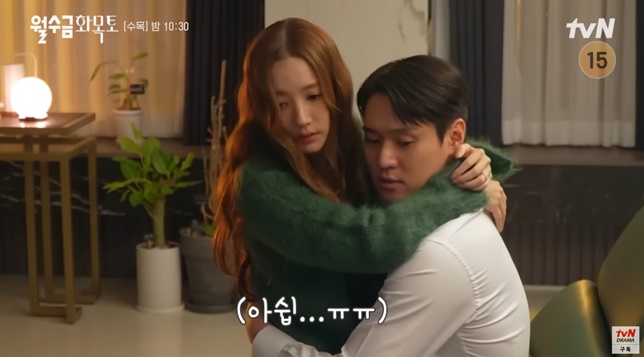 It is an interesting little video that shows you just how seriously these actors work to make each scene authentic and believable, while ending up being something viewers love.

Of course, if you have already watched Love in Contract Episode 11, you know how this scene eventually went. (Perfect, wasn’t it?)

And if you haven’t, get on it, as it really is one of this season’s best K-dramas, with the three leads — Park Min Young, Go Kyoung Pyo and Kim Jae Young — doing a fabulous job in their roles.

Watch the Love in Contract Choi Sang Eun and Jung Ji Ho kissing video below, which also includes scenes filmed at the police station as Sang Eun goes to confront her black-helmeted attacker, and behind-the-scenes clips showing Go Kyoung Pyo may have a bit of a sweet tooth. (Well the man does have a fabulous body, so a couple of bits of candy won’t kill him, right?)

Or, if you’re outside Korea, watch it on Viki like the rest of us.

RELATED: What song is playing in Love in Contract, Episode 1 over the end credits?