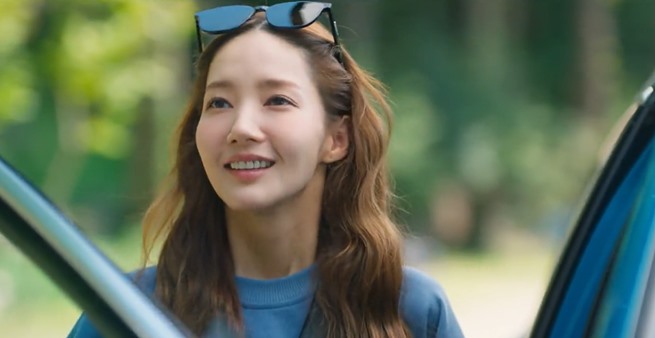 The new Korean rom-com Love in Contract is not only stellar because it stars the fabulous Park Min-young (isn’t she just the goddess of K-dramas?), and the equally superb Go Kyung-pyo and Kim Jae-young, but also because the story is unique and fun.

Throw in that the Love in Contract soundtrack is pretty darned cool and, if you are looking for a good Korean rom-com this fall, you can’t go wrong with this one.


Especially when, if you enjoy great K-pop, this show has such catchy songs, you will also find yourself binge-listening to its soundtrack again and again.

Songs like that fabulous K-pop track playing as Choi Sang-eun (Min-young) heads out to her countryhouse, finds the Canada postcard from Woo Gwang-nam (Kang Hyung-suk) in her glovebox, and then drives her open top car into that gorgeous scenery.

What song is it, and whose gorgeous voice is singing it?

What song is playing in Love in Contract Episode 1 as Choi Sang-eun (aka Jamie Jung) is at her country house, and over the end credits?

The song playing in those scenes is called ‘Real Love‘ by Yuju and, from the first moment I heard it, I immediately headed to Spotify to put it on my Liked Songs list so I could play it again and again.

After all, Yuju’s ‘Real Love‘ has a beautifully addictive melody, the almost dance-beat makes you want to put the song on repeat and then dance like a crazy person around your house, and Yuju’s soaring voice brings such romantic thoughts to mind, it’s no wonder the track has almost 300,000 plays on Spotify already.

‘Real Love‘ by Yuju is one of a slew of songs the Korean singer has had featured on drama soundtracks in the last few years, including on The Girl Who Sees Smells, True Beauty, Alice, Was It Love? and Run On.

No wonder really when you hear her stunning voice. A voice that makes any emotional scene in a drama grab you just that much more.

Along with her drama soundtrack appearances, Yuju also released her debut EP earlier this year.

Called Rec, it was her first major release since the now 25-year-old singer left the Korean girl group GFriend to go solo.

Listen to ‘Real Love‘ by Yuju from Love in Contract Episode 1, and Choi Sang-eun’s country house visit, on the Spotify player, and in the song’s official music video featuring scenes from the drama series.

Keep watching the drama, and you’ll hear the song show up in other powerful scenes too.

Watch Love in Contract, with its strange love triangle, on Viki.