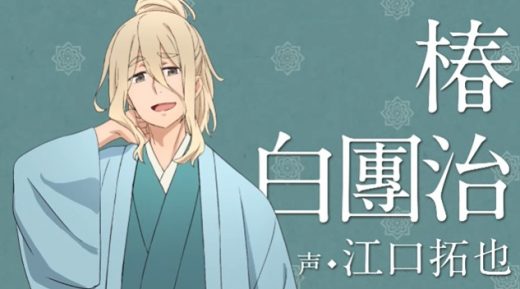 The fourth My Master Has No Tail character video has just been released in as many days.

Today, it is Byakudanji Tsubaki’s character video, which features the grey-haired rakugo master showing off his skills in making his audiences laugh.


Byakudanji Tsubaki is voiced by Takuya Eguchi, who will be familiar to anime fans as the voice of Loid in SPY x FAMILY, and Takeo Gōda in My Love Story.

Hideyo Yamamoto (Strike the Blood) is directing the anime, with Liden Films in charge of anime production.

It is based on the manga by TNSK, which is being published in English by Kodansha.

Anime News Network has this to say about its plot:

In Japan’s Taishō era (1912–1926), Mameda is a shape-shifting tanuki girl who dreams of becoming human. Mameda transforms her outward appearance into a pretty raven-haired human girl and heads to the bustling city of Osaka.

However, people instantly see through Mameda’s guise, and one beautiful woman ruthlessly says to the dejected Mameda, “Go back where you came from.”

As it turns out, that woman named Bunko is herself a supernatural creature who transformed herself into a rakugo (comic storytelling) storyteller. Mameda begs Bunko to become her master and teach her the ways of playing a human.

My Master Has No Tail premieres on September 30th in Japan.

Watch the Byakudanji Tsubaki’s character video below to check out the popular rakugo master in action.