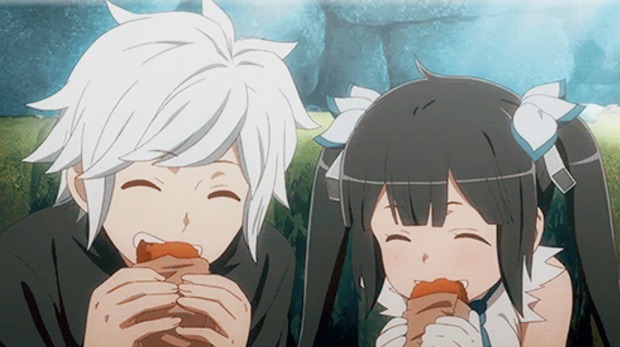 One of the first fantasy anime series I watched and loved was DanMachi, aka Is It Wrong To Try To Pick Up Girls in a Dungeon? (Japanese titleDungeon ni Deai wo Motomeru no wa Machigatteiru Darou ka).

A series I actually didn’t watch when it was first released as, from the title, it seemed as though it may just be another harem anime I may not like.Man, was I wrong.

DanMachi is one of the most well-written and funniest fantasy anime series released in the last 10 years.

What with protagonist Bell Cranel getting massacred in almost every dungeon he ends up in, until he is eventually saved by the Sword Princess Ais Wallenstein (a weak male character and a strong female character, how less-usual is that?) and goddess Hestia, whose family Bell belongs to, being one of the most annoying but cutest deities in all of animedom.

Throw in the superb animation, stunning artwork, an interesting storyline and characters that you not only like but that actually develop as the series continues and, if you usually enjoy fantasy anime but have not seen Is It Wrong To Try To Pick Up Girls in a Dungeon?, you should.

With a couple of seasons out, two OVAs, a full-length movie and a spinoff though, it can be slightly confusing if you are not sure where to start or what order to watch them in.

Or if you are wondering if the spinoff is worth watching at all (it absolutely is)?

Here then is how to watch Dan Machi in the right order with every property released so far. 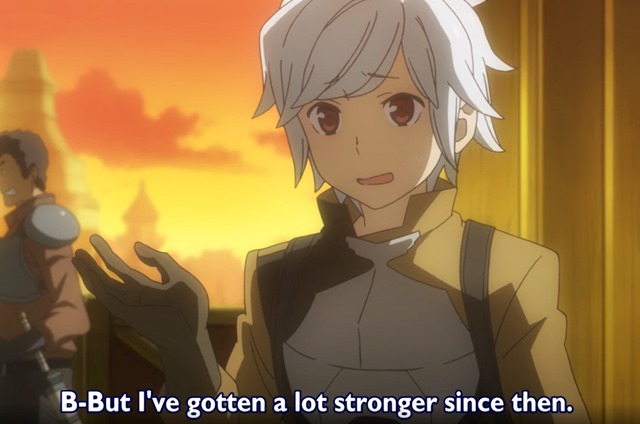 DanMachi, aka Is It Wrong To Pick Up Girls in a Dungeon? (Season 1)

Season 1 of DanMachi has 13 episodes.

It begins with 14-year-0ld Bell Canell desperate to become a skilled adventurer but failing so badly he eventually has to be rescued by the powerful swordswoman Ais Wallenstein when she finds him in a dungeon about to be eaten by the monster he is trying to kill.

In episode one, Bell is living as part of the Hestia Familia — well, actually the only member of the Hestia family, as Hestia is a goddess with little power or draw when it comes to having adventurers fighting for her. That means inexperienced Bell is the only fighter she has been able to attract.

Season 1 ends with Bell, now nicknamed Little Rookie, and the rest of Hestia’s now-larger family fighting a monster called a Black Goliath. A fearsome foe that can kill all but the strongest of adventurers with just one strike.

During the fight, Bell is severely injured but eventually recovers enough to use the powerful Heroic shot. Along with a stab from the knife Hestia gifted him, and Bell finally manages to kill the Black Goliath.

You can watch Season 1 of Is It Wrong To Try To Pick Up Girls in a Dungeon? on Crunchyroll. 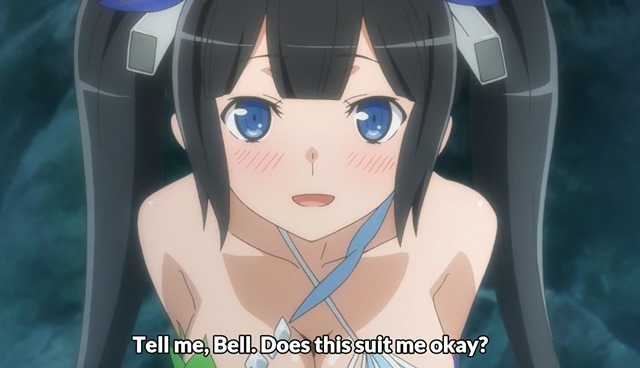 DanMachi OVA Season 1 — “Is It Wrong to Expect a Hot Spring in a Dungeon?“

In the OVA released right after Season 1 of DanMachi, Bell, Hestia and the rest of their party are on the way back to the surface from the 18th floor.

Halfway back, they come across a hidden hot springs they had never seen before. But while lured into soaking their tired bodies in its warm waters, monsters that are hidden in the hot springs attack.

The OVA continues on from the happenings at the end of Season 1, adds even more fan service to an already fan servicey anime series, but does so in the cutest and funniest of ways.

That’s why, while the “Is It Wrong to Expect a Hot Spring in a Dungeon?” OVA does not move the story forward at all so is not a mandatory watch, for the humor alone it is still well worth spending the 24 minutes it lasts.

You can watch the OVA on HDIVE. 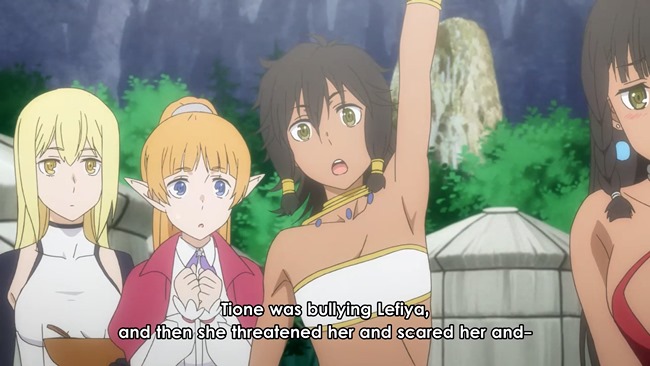 Sword Oratoria: Is it Wrong to Try to Pick Up Girls in a Dungeon? On the Side is a spinoff of the original DanMachi series that takes place in the same fantasy world with many of the same characters.

At the start of the series, it seems as though the same story as in the first season of DanMachi will play out, but this time from the perspective of the Sword Princess, Ais Wallenstein.

That does not happen for long, however, before the story branches off and follows the Loki Familia with Ais Wallenstein and novice mage Lefiya Viridis center stage.

Ais wants to improve her sword skills even more, while Lefiya is trying to become the most powerful mage in Orario.

Along with the Loki Familia, the two venture into the lower levels of the underground labyrinth where they both hope the high-level monsters there will give them the challenge they need.

While not a necessary watch, if you just want to stick with the original DanMachi story and characters, if understanding more about the world, the other familias in it and, of course, Ais Wallenstein is something you are interested in, you will enjoy Sword Oratoria. A lot. 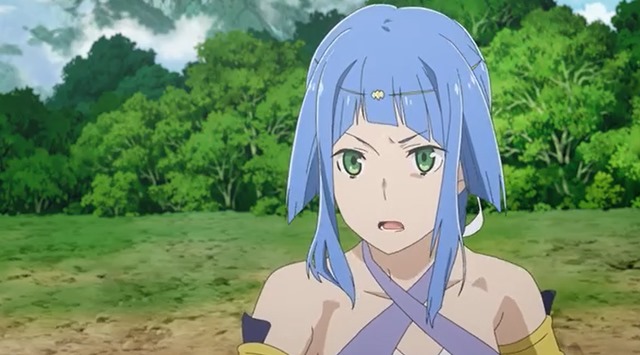 DanMachi: Arrow of the Orion movie

Arrow of the Orion introduces a new character, goddess Artemis, an old friend of Hestia’s and someone who is in need of help.

Artemis arrives in the city of Orario looking for a hero. But, instead of choosing a hero by having them fight to become her savior, she decides to use a weapon — a spear. A weapon that will choose the hero just like Excalibur chose King Arthur.

Of course, this being DanMachi, the hero chosen by the spear may not be the one you expect.

Once chosen, Artemis, Hestia, protagonist Bell Cranell and the rest of the Hestia Familia journey to the ruins of the ancient city of Elsos where they soon learn all of the Artemis Familia have been slain by a monster too powerful for them to destroy. 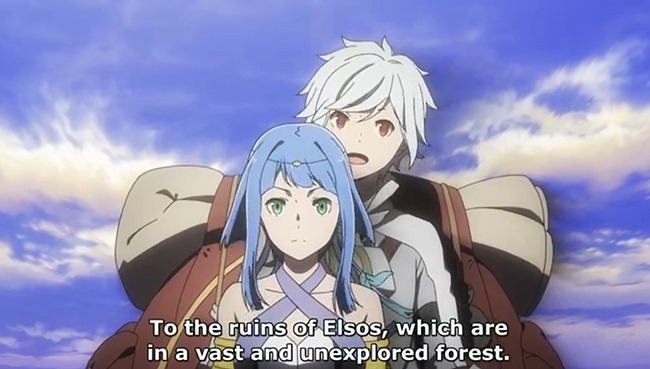 It is now up to Bell, the hero, the Hestia Familia, the god Hermes and his Familia and Artemis herself to defeat the ancestral monster and save the world.

But Hestia is more than a little concerned as Artemis and Bell soon become too close.

HDIVE is currently streaming DanMachi: Arrow of the Orion. 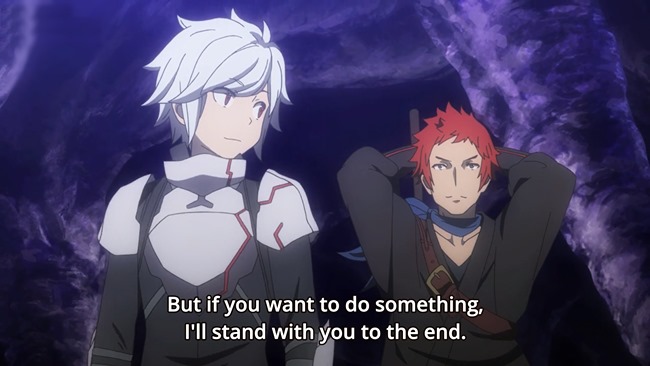 DanMachi, aka Is It Wrong To Pick Up Girls in a Dungeon? (Season 2)

While DanMachi Season 2 begins with Bell Cranell in the dungeon fighting to improve his skills and help the fortunes of the Hestia Familia, it soon transmutes into Bell fighting to be left alone by the other familias in the city who have suddenly noticed how fast he is improving and want to steal him away from Hestia to add him to their own families.

DanMachi Season 2 ends with Bell telling Hestia he knows he will die one day while she, being a goddess, is immortal.

Hestia tells Bell not to worry as, even when he is an old man, she will still be with him and will never let him go and that, even if death tears them apart, she will still come for him.

Season 2 is on Crunchyroll. 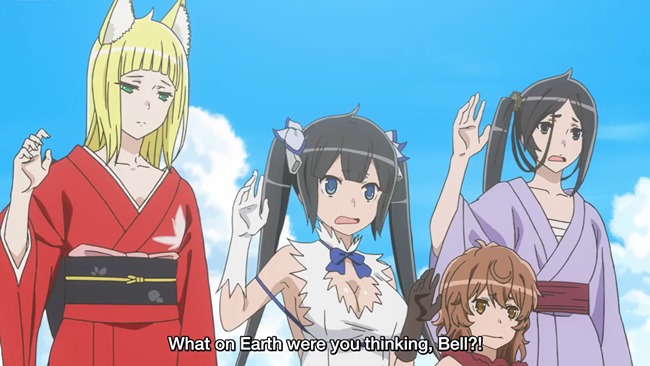 DanMachi Season 2 OVA — “Is It Wrong to go Searching for Herbs on a Deserted Island?“

In the latest, and extremely strange, release in the DanMachi franchise, the Hestia Familia and friends head to a desert island to find some rare medicinal herbs.

And, while it at first seems like it will be nothing but fan service in bikinis, this Season 2 OVA soon turns out to be an odd one as the Sword Princess Ais suddenly appears, seems to have hit her head and begins to behave far differently than normal.

Soon the rest of the group is also acting as though they have been injured, with Bell the only one seemingly unaffected.

The DanMachi Season 2 OVA is also on HDIVE. 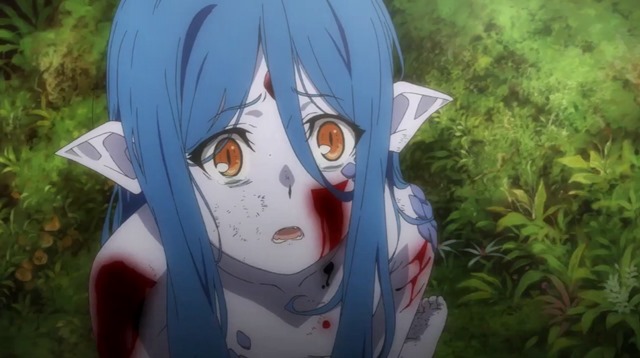 DanMachi, aka Is It Wrong To Pick Up Girls in a Dungeon? (Season 3)

Season 3 of DanMachi was scheduled to be released in July, 2020 but, due to the coronavirus shutdowns in Japan, it will be at least October before it airs.

That means, as it stands right now, the Season 2 OVA is the last DanMachi property you can watch.

So that is how to watch Dan Machi in the right order as of June, 2020. Enjoy!

Related: There is a new DanMachi RPG being developed, and it looks amazing