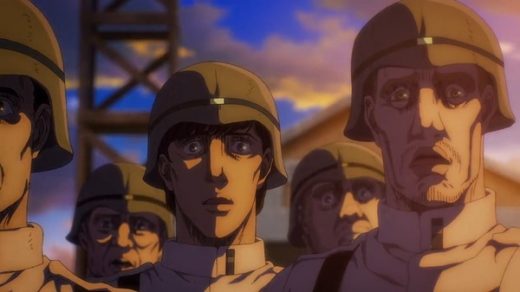 The final season of Attack on Titan saw a number of instrumental pieces and songs reappearing from previous seasons of the anime series.

This includes Hiroyuki Sawano’s ‘SymphonicSuite (AoT) Part2-1st: Attack on Titan (Wmid)’, which was that gorgeous song heard right at the end of the final episode — Attack on Titan, Season 4, Episode 28, “The Dawn of Humanity“.

The track played as every nation joins together and organizes an enormous naval blockade in an attempt to stop the Titans.

But, of course, they tragically fail.

It was also the second time the song had been played on the anime, as it first appeared on the first episode of Season 3.

Japanese composer Hiroyuki Sawano composed the soundtrack for all four seasons of the hit anime and, to me, those incredibly powerful soundtracks had as much to do with Attack on Titan‘s success as the art style, the animation and the story.

After all, none of those hundreds of emotional scenes we all love so much would have been nearly as powerful without Sawano-san’s music.

Listen to Hiroyuki Sawano’s ‘SymphonicSuite (AoT) Part2-1st: Attack on Titan (Wmid)’ in the video, and on the Season 3 soundtrack.

And do listen to the entire soundtrack, as it really is one of the best out there.