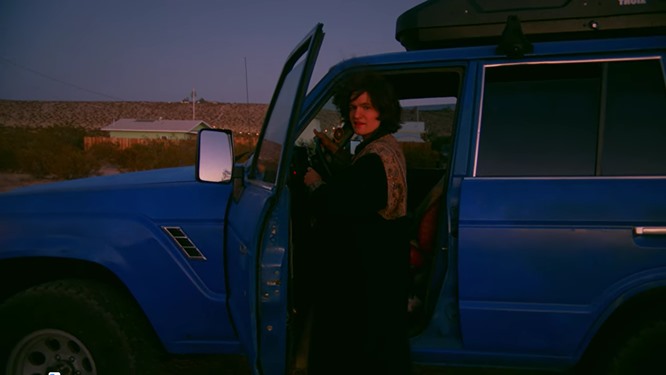 Called Songs and Instrumentals, both albums came out on October 23rd, 2020 via 4AD after Lenker headed into the studio when Big Thief’s planned European tour was canceled mid-way through due to the world-wide panic over Covid-19.

Songs for both albums were written in just a couple of months. They were eventually recorded in the one-room cabin she was staying in at the foothills of the Berkshire Mountains.

This week, Adrianne Lenker has released a music video for her single ‘forwards beckon rebound‘. A single that comprises an acoustic guitar and Lenker’s almost old-fashioned almost haunting vocals.

And a video that was directed by Lenker herself. One that has her out in the desert at Joshua Tree at dusk, reaching into her truck to choose a song and then dancing exuberantly like nobody is watching.

The album and its sister — the two-track instrumental album Instrumentals — were lauded by critics at the time of release, and ultimately ended up on the Best Albums of 2020 lists of a slew of top critics at the end of the year.

Watch and listen to Adrianne Lenker’s ‘forwards beckon rebound‘ music video and you will quickly see why, then listen to both Songs and Instrumentals above and below.

Both albums are almost painful in their emotionality, but utterly utterly beautiful.