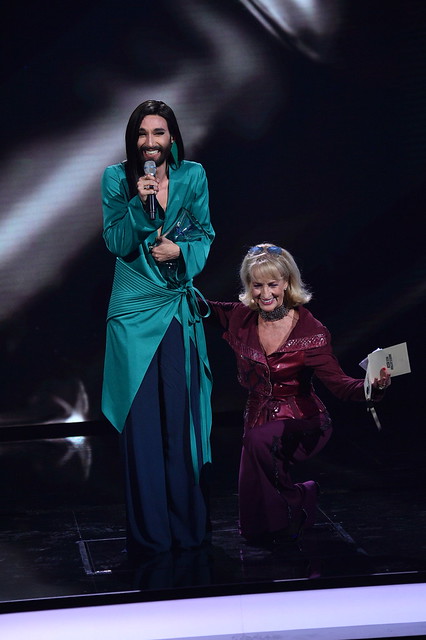 Tonight was Austria’s Amadeus Awards 2016. An event I watch via livestream nowadays as Conchita Wurst has been featuring quite heavily there recently.

Tonight was no exception. After all, not only did Conchita win the Amadeus Award for ‘Artist of the Year‘, (Künstlerin des Jahres), but she also gave a superb live performance of her single ‘Firestorm‘.

Both events that were beyond fabulous for two completely different reasons. My girl, because she just is, and the phenomenal Dagmar Koller down on one knee lauding her.

First up, Conchita’s Amadeus Award 2016 for ‘Artist of the Year‘. An award I fully expected her to get as, come on, which other female singer comes to mind when you think about Austria last year?

Conchita at Poland’s Sabat Czarownic (holy fuck!), Conchita in latex at Cologne Pride (holy fuck doesn’t even cover it), Conchita in Japan, and at Sanremo, and doing a duet with Shirley Bassey, and performing live at Voices for Refugees concert (the first time I saw her sing live, and words can’t explain how good she was, and that’s coming from me, a writer), and on and on.

There isn’t an Austrian singer that has made such a mark on the worlds of music, fashion and art for I don’t even know how long. So, of course, it would have been a bit of a travesty if she hadn’t won.

But, while Conchita winning three awards at last year’s Amadeus event was memorable because of how touching she was up on that stage, what made Conchita’s ‘Artist of the Year’ award just as awesome this year was Dagmar Koller presenting the award.

Because, regardless that she stole the show from Conchita with her gushings of ‘I love you’, and her insistence on giving Conchita’s acceptance speech for her, there was something so beautiful about Dagmar Koller being so incredibly dramatic about how much she adored Conchita, and how amazed she was about her Sydney Opera House performance.

And then to have the great Dagmar Koller go down on bended knee right there on that stage, she loves Conchita so much, well, it’s only April but that has to be one of the best images of the year.

Because, without being too sentimental, think about young Tom Neuwirth in his attic singing his songs and making his dresses, and think about what must have gone through his head as he imagined one day becoming a big star.

And I wonder, did he ever for one moment imagine something like that?

Dagmar Koller, one of Austria’s most iconic people and the former ‘First Lady of Vienna’, as she was when her husband was the city’s mayor, screaming out her joy as she opened the envelope and saw Conchita’s name listed as the winner. Then going down on bended knee to profess her admiration.

Because if that boy ever imagined acceptance and love, I hope it was as huge and as grand and as important as that.

You can also watch the entire Amadeus Awards show at the ATV website. It is also, nicely, (thank you, ATV) not region locked.