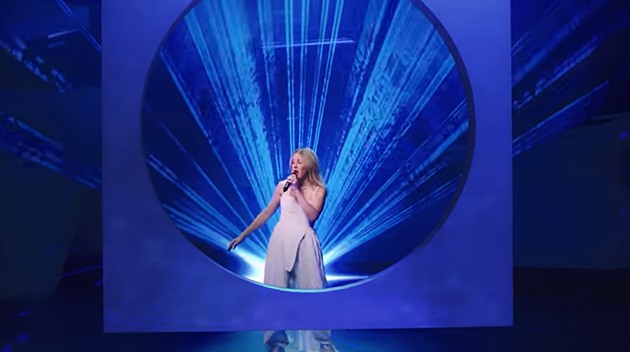 So this is a strange one to review. If that is what you want to call what I am about to do — talk about Ellie Goulding’s ‘Brightest Blue‘ official live performance at VEVO. A video that has just been uploaded to the British artists’ YouTube channel (watch below).

Because, while Ellie Goulding’s ‘Brightest Blue‘ is a gorgeous song and has some of the best live vocals Goulding has produced, there are several things in the video that are so distracting they spoilt the experience of watching it for me.

The first is whatever she is wearing.

One of the fugliest outfits I have seen any artist wear. Ever.

A dress?/culottes?/a partial harem swimsuit where the crotch has been left un-sewn and hanging down in front of a dress? — it is actually hard to describe what on earth it is.

Especially because it is paired with a massive pair of running shoes, all of which combine to make Goulding look clunky and double her normal size. 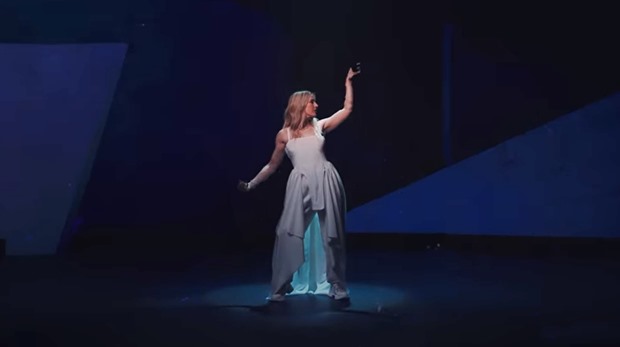 Then, just as you think you might be able to overlook the atrocious outfit and concentrate on her beautiful vocals, down comes a blue square with a circular cutout that then hangs awkwardly in front of the singer with, of course, her sports shoe-ed feet still visible below.

Honestly, I cannot figure out what the director of the video was trying to portray? It is just so amateurish.

On top of all that ugliness and weirdness, Ellie Goulding doesn’t seem to have quite made up her mind if she is filming a live video that cannot be cut or a music video that is going to be hacked to pieces later. Awkward as she looks as she sings some of the extremely fast verses and as she pushes her hair away from her face several times throughout.

Now, don’t get me wrong, Goulding produces superb music and is one of my particular favorites when it comes to British singers. ‘Brightest Blue‘ itself is a stunning song.

I just wonder what the hell went through the mind of whoever thought any of that distracting strangeness at Ellie Goulding’s ‘Brightest Blue’ live performance at VEVO was a good idea?

And no, I rarely if ever comment on what a singer is wearing as I never care but, wow, this outfit detracts from the song and her beautiful live performance of it so so so much it is a shame.

The track is the fourth single released from Goulding’s fourth studio album of the same name. The 19-track album itself hit store shelves today, July 17th, and it quickly hit my favorites on Spotify.

Watch Ellie Goulding’s ‘Brightest Blue‘ live performance at VEVO video below and see if everything going on in that video bothers you as much as it does me.

If so, don’t let it ruin that stunning song as you can listen to Goulding’s Brightest Blue album in its entirety below.