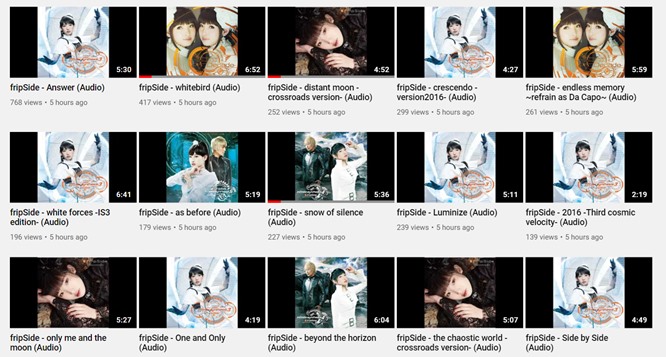 When it comes to Japanese music, I always think many Japanese record labels/agencies/artists are still somewhere back in the 1990s when it comes to the Internet or streaming music services.

After all, many of them seem to make accessing contemporary Japanese music almost impossible, as the songs are not released outside Japan, or they bombard us with 9,000 video releases on the same day.

Take the Japanese pop/trance duo fripSide — a pairing I absolutely love, as their music tends to be catchy, fast-paced, with beautiful melodies and superb vocals.

But, like many Japanese artists, fripSide does not yet seem to understand how to use outlets like YouTube to their advantage. Not when they release 72 audio videos on the same day.

And no, I am not complaining, as I am always thrilled when fripSide makes their music more accessible. But when an artist releases such a large number of videos all at once, all that does is make sure most of the videos are ignored as nobody has time to listen to 72 videos all at once.

Particularly on a Friday, the biggest release day for new music in the music world.

And, with the enormous number of videos uploaded to YouTube in just one day (720,000 hours worth of videos daily), most of those 72 fripSide videos will then be forgotten as new ones from other channels they subscribe to appear in fripSide fans’ feeds.

fripSide releasing 1-3 videos a day over an extended period of time.

More fans will listen to each one, and fripSide will gain more traction on YouTube. Just sayin’.

That being said, if you are as big of a fan of fripSide as I am, they now have 72 new audio videos up on their YT channel.

The music is from a number of different fripSide albums released throughout the duo’s career — The Very Best Of fripSide 2002–2006, infinite synthesis 4, infinite synthesis 5, the very best of fripSide -moving ballads-, crossroads — with songs like ‘frosty breeze’, ‘white bird’, ‘distant moon’, ‘beyond the horizon’ and ‘Side by Side’.

Head over to their channel to give them a listen — and do try to listen to as many as you can, as the more views fripSide get, the more traction their videos get in YouTube search results and the more people will listen to their superb music.

Meanwhile, here is a selection of fripSide videos released today — some of my favorite tracks — fripSide’s ‘as before‘, ‘endless memory‘, and ‘killing bites‘.