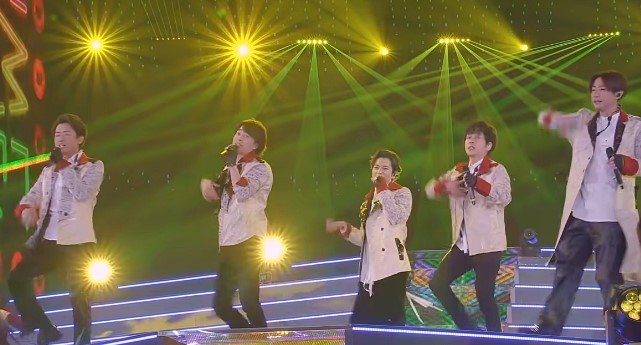 The track is from Arashi’s seventeeth studio album (yes, seventeenth!).

Called This is Arashi, the album came out late last year right before the group went on indefinite hiatus.

This is Arashi became an immediate success for the iconic idol group debuting in the top spot on the the Oricon Albums Chart, and going on to sell almost 700,000 copies in Japan during its first week alone.

Probably not too surprising, however, as they are still the best-selling boy band in Asia.

Although, you can’t really call these men ‘boys’ anymore, as most of them are in their late 30s, with lead singer Satoshi Ohno just turning 41 this year.

The performance in the ‘Show Time‘ music video is from the This is Arashi LIVE 2020.12.31 concert extravaganza, which was held without an audience due to Japan’s Covid-19 protocols.

The release of Arashi’s ‘Show Time‘ music video isn’t to promote their last album, however, but instead to remind us This is Arashi LIVE 2020.12.31 is coming out on both Blu-ray and DVD on December 29th.

Like everything else Arashi releases, even while on hiatus, it is bound to be a big hit.

Watch Arashi’s ‘Show Time‘ music video below, as the guys definitely know how to put on a good show.