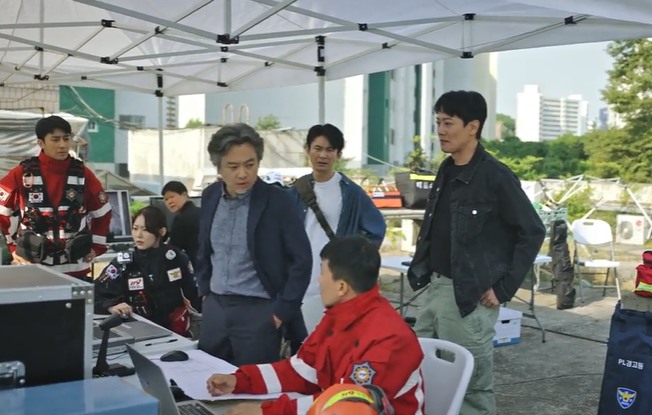 So well, The First Responders took the top spot in its time slot nationwide, and came in second for the entire night. According to Neilsen Korea, the new action thriller scored 7.6% nationwide for its first episode, and did even better in Seoul with a 7.8% rating.


Why am I not surprised?

All actors who have a decent number of good dramas under their belts, and actors who know how to create chemistry with the people they are acting across from in just about every one.

And that’s what they seem to be doing in The First Responders already, as episode 1 showed almost immediate chemistry between the three. As well as, for me at least, the hope we might get some romance out of this one as well.

Throw in the writer of The First Responders (Min Ji Eun) didn’t pull any punches when it came to the first episode’s opening. As, just over a minute in, and we already know Jin Ho Gae (played by Kim Rae Won) is being disciplined for direct assault of a suspect.

Things get even better right away when, as Jin Ho Gae thinks he might be able to get away with an apology, we see his actual assault of the victim played out on video. On a big screen, in front of everyone on the force who will be handing out his punishment, and his co-workers.

That suggestion of future excitement only got better from there, with a fast abduction and a badly-injured woman locked in an apartment with a crazy guy.

To say then that The First Responders is already a banger of a show, that even manages to deliver a few laughs, might be a bit of an understatement, as I haven’t seen a first episode of a Korean drama this attention-grabbing in eons.

Or one that makes you feel so breathless just watching it.

Watch the trailer for The First Responders below and, if you are in one of the lucky regions Disney + is currently airing the show, watch it. (Or get a good VPN, eh?)

Then expect episode 2 to earn at least the same viewership as the first one, if not more.

After all, word travels how good a drama is, and this one offers enormous promise already.