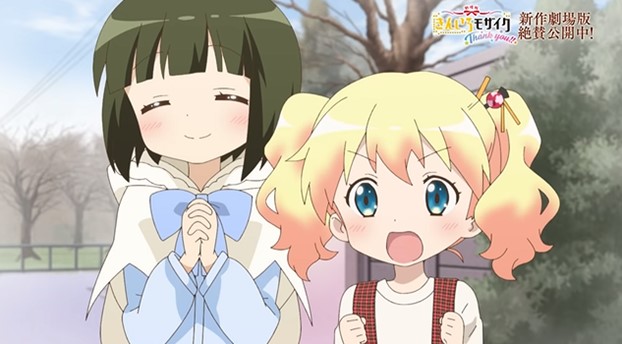 It has been a couple of years since I watched the second series of Kin-iro Mosaic, aka KINMOZA!, so I forgot just how cute Shinobu, Alice and the rest of those adorable high school girls were.

Something I remembered when I watched the just released Kin-iro Mosaic Thank You!! trailer — the new promotional video for the upcoming film based on the popular slice of life series.

The PV hit our shores this week as Kin-iro Mosaic Thank You!! is currently showing in select movie theaters in Japan, with a release in the west coming, hopefully, soon.

The film is based on the Yui Hara four-panel manga series Kin-iro Mosaic / KINMOZA!, and follows on from the first two series, with our favorite girls now in their third year of high school and heading towards graduation.

But, before they do, there is time for a trip to Nara and Kyoto Prefectures and all the craziness that entails.

And, yes sadly, the film will end the KINMOZA! anime franchise. 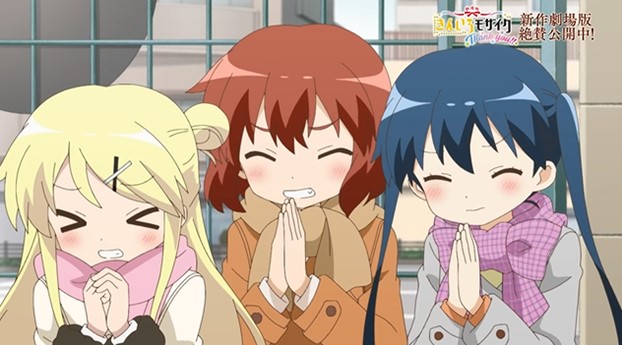 Kin-iro Mosaic Thank You!! is directed by Munenori Nawa (Nakaimo – My Sister Is Among Them!), with the screenplay written by Yuniko Ayana, series composition writer for Seasons 1 and 2, and with Kazuyuki Ueta from Kin-iro Mosaic and Hello!! Kin-iro Mosaic as character designer.

The series is again being animated by Studio Gokumi and AXsiZ.

Watch the new Kin-iro Mosaic Thank You!! trailer below and, of course, we’ll give you a heads up for its release date in the west as soon as we get it.

And, if you don’t yet own Kin-iro Mosaic Seasons 1 and 2, I grabbed mine on DVD in a sale at Sentai Filmworks recently for just a few dollars.