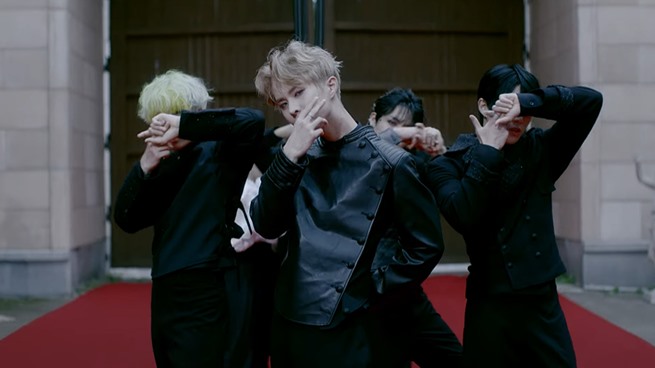 South Korean boy band KINGDOM’s ‘Long Live the King‘ performance video is now up on YouTube and, if you like explosive dance moves, a hugely dramatic song, and the boys looking gorgeous while dressed in Louis XV-style costumes, this one is for you.

Particularly as every one of the seven members of the group gets pretty decent upfront-and-center time.


KINGDOM’s ‘Long Live the King‘ is from the boy band’s recently released seven-track fifth mini album History of KINGDOM: Part V. Louis, which came out on October 5th, 2022 via the GF Entertainment label.

The album is one of (likely) seven mini albums planned to be released by the Korean group. Each with the name of one of the band members in the album’s title.

My question then is, with Mujin and Jahan to still get their mini albums and with Chiwoo having left the group in May, will there actually be eight mini albums with new member Hwon’s as the final one?

Not that I am complaining if there are as, if future music and videos they release are as good as KINGDOM’s ‘Long Live the King‘ performance video, that would be something to really look forward to, eh?

Watch that below, and listen to the group’s History of Kingdom: Part V. Louis  in full down there as well.

Oh and yes, if you are new to KINGDOM, they do wear gorgeously elaborate costumes in every music video they release. You really should watch more, as they are stunningly filmed.