Called ‘Luv Bias‘, the song will already be familiar to fans of the TBS drama series Oh! My Boss! Koi wa bessatsu de, as it is that show’s theme song.

As often happens in Japan, Kis-My-Ft2’s ‘Luv Bias‘ will come in three different editions, with each version featuring a different coupling track, or B-side.


In other words, an incentive for fans to buy all three of them, and you just know many will. 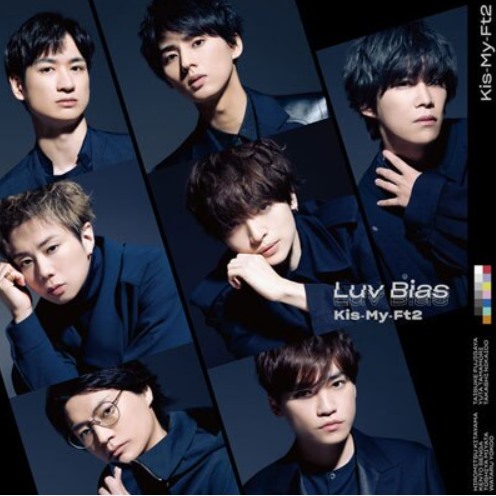 According to Kis-My-Ft2, the three versions of ‘Luv Bias‘ are:

Limited Edition A — this will feature coupling track ‘NAKED‘, as well as a bonus DVD that includes the ‘Luv Bias‘ music video plus a making-of video for the track.

First Edition B — The coupling track on this version is called ‘Original Color‘, with that edition coming with a variety show video called KIS-MY-TV — Yuru Sports.

In this case, ‘Original Color‘ is described by Kis-My-Ft2 as ” a song packed with happiness that gently relaxes your cheeks like a refreshing spring breeze”.

Regular Edition — Kis-My-Ft2’s ‘Luv Bias‘ regular edition does not include a DVD, but does include the coupling song ‘Big Wave‘ as well as two versions of ‘Luv Bias‘ and its instrumental track.

Learn more about each of the editions on Kis-My-Ft2’s official website.

You can pre-order each version there as well.

You can also hear a shorter version of Kis-My-Ft2’s ‘Luv Bias‘ on the trailer for the drama Oh! My Boss! Koi wa bessatsu de.

That means Kis-My-Ft2 fans not only get a beautiful theme song for the show and an upcoming new band single, they also get to spend even more time with one of the band’s adored members.

Watch the just released music video for Kis-My-Ft2’s ‘Luv Bias‘ below, along with trailer for the song including footage from the drama series below that.