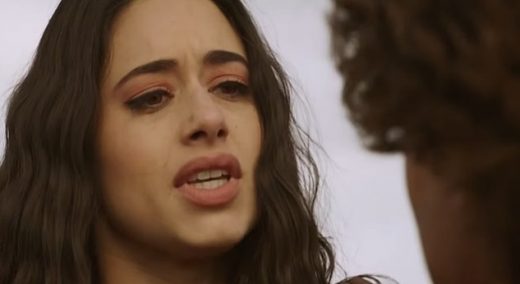 A series finale that outdid itself for the superb music featured on its soundtrack.


‘Head Over Feet‘ was heard as Liz is working at the CrashDown when Allie shows up.

Alanis Morissette’s ‘Head Over Feet‘ is from the Canadian-American singer’s now iconic third studio album Jagged Little Pill, which came out in 1995 via the Reprise and Maverick labels.

The song was the fifth single released from the album, and is a sweet track sung to a lover about how much she is grateful for his love and devotion.

‘Head Over Feet’ charted in 11 countries, but was the most successful in the U.S. where it charted on six different charts, making it to the #1 spot on the Adult Top 40 chart and on the Mainstream Top 40 chart.

The song also had two music videos, one with the camera trained on her head (face) and one on her feet.

Listen to Alanis Morissette’s ‘Head Over Feet‘ from last night’s Roswell, New Mexico in the head version of the song’s music video, and on her Jagged Little Pill album.

An album, by the way, that hit the #1 spot in 13 countries, and went on to be named by critics as one of the best alternative rock albums of the 1990s.