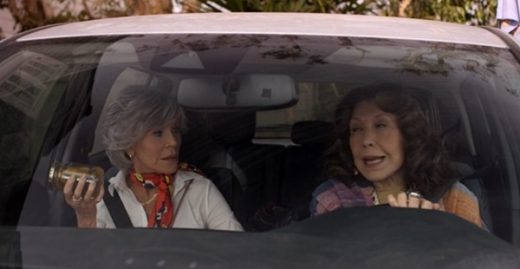 American musician, singer, author, painter and punk rock singer Alice Bag’s ‘Risk It‘ was played on the final season of Grace and Frankie this week — Grace and Frankie, Season 7, Episode 7, “The Psychic“.

The headbanging song was that high-energy track playing at the end of the episode as Frankie leaves to head out to Mexico, forgets her car keys and Grace takes them out to the car and drives off with her.


Alice Bag’s ‘Risk It‘ is the last track on her third studio album Sister Dynamite, which came out in April, 2020 via the indie record label In The Red Records.

The album full of largely upbeat music was well-received by critics, although not commercially successful.

Listen to Alice Bag’s ‘Risk It‘ as heard on Grace and Frankie in the video, and on the singer’s Sister Dynamite album.

The final season of Grace and Frankie is now on Netflix.