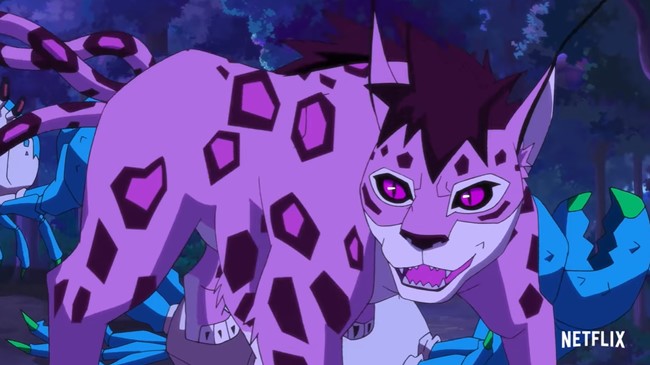 A series that has featured some of the best music in any animated series released in the last decade or longer.


The world music track ‘Yas U Kno‘ was that amazing song with the phenomenal beats that played in the scene where Kipo turns into a huge panther and fights the mega crabs.

A fight that, of course, ends with Kipo and her mother the winners, and everyone in the party enjoying a huge crab feast.

Atomic Drum Assembly’s ‘Yas U Kno‘ is from the duo’s six-track EP Jump In, which was released in 2019 via Island Life Records.

The British duo are known for their world music vibes mixed with an electronic twist.

As for Kipo and the Age of Wonderbeasts, the three-season animated series was created by storyboard artist and character designer Radford Sechrist as an adaptation from his Kipo webcomic. (Article continues below…)

Listen to A Tribe Called Red’s ‘Sisters’ (feat. Northern Voice) from Kipo and the Age of Wonderbeasts

The gorgeous animation for the series was carried out by South Korean animation company Studio Mir (Young Justice: Outsiders).

The first season of Kipo and the Age of Wonderbeasts premiered in January of this year to rave reviews from both critics and fans. The third and final season began streaming on Netflix last week.

Listen to Atomic Drum Assembly’s ‘Yas U Kno‘ as featured on the animated series below. And be sure to give their EP Jump In a full listen (in the Spotify player below) — including ‘Yas U Kno‘ — as every track on it will make you want to dance just like that one.

You can also re-live that amazing Kipo and her mom vs the crabs fight scene in a clip from the hit show at the bottom of this article.