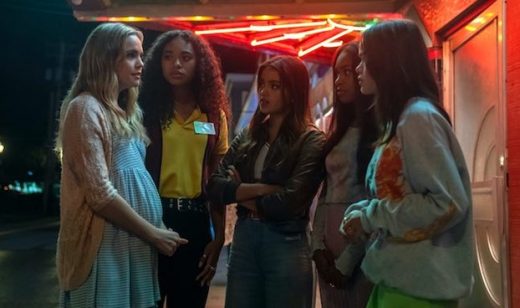 American indie dance pop singer Ava Max’s ‘My Head & My Heart‘ was one of the cool contemporary songs played on the soundtrack of this week’s release of Pretty Little Liars: Original Sin, Season 1, Episode 2, “Chapter Two: The Spirit Queen“.

The catchy dance song was released by Max in late 2020 via Atlantic Records as a digital addition to her previously released debut studio album Heaven & Hell.

Ava Max’s ‘My Head & My Heart‘ went on to become one of the singer’s biggest hits, making it onto charts in 27 countries and charting on more than one chart in several of them.

Max’s ‘My Head & My Heart‘ has an official music video featuring the singer wearing a variety of sexy outfits as she parades around town with her friends, as well as performing the song in a red room along with three musicians.

Listen to Ava Max’s ‘My Head & My Heart‘ in that video, and on her debut studio album below.

The song itself is ridiculously catchy to the point that, I’m not even a huge fan of dance music, and I have still been listening to it non-stop for hours now.