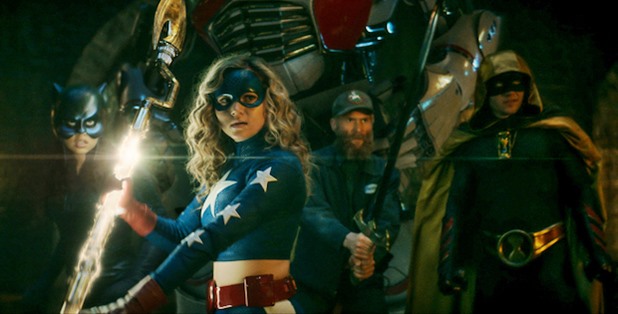 Well, the season finale of DC’s Stargirl tonight certainly did not disappoint as the show continued to feature superb modern music right up to its final minutes.

That included this week’s use of alternative rock band Better Than Ezra’s ‘Grateful’, which was played on DC’s Stargirl, Season 1, Episode 13, “Stars & S.T.R.I.P.E. Part Two” as it aired on DC Universe.


That track was the song playing as S.T.R.I.P.E. and Stargirl were flying to the tower.

Better Than Ezra’s ‘Grateful‘ is a stand-alone single the band released in mid-2018 as part of a celebration of the 25th anniversary of the release of their debut album.

‘Grateful’ itself is a song that celebrates life and reminds everyone they should slow down, stop worrying about what they don’t have and be grateful for all the amazing things they do have.

After all, our lives are often much better than we realize.

Listen to Better Than Ezra’s ‘Grateful’ as featured on DC’s Stargirl in the official lyric video below.

Meanwhile, DC’s Stargirl may have finished its first season but there is no reason to be concerned. The show has already been renewed for a second season, which will air on The CW sometime in 2021.

Until then, listen to some of the season’s amazing songs on Leo Sigh here.