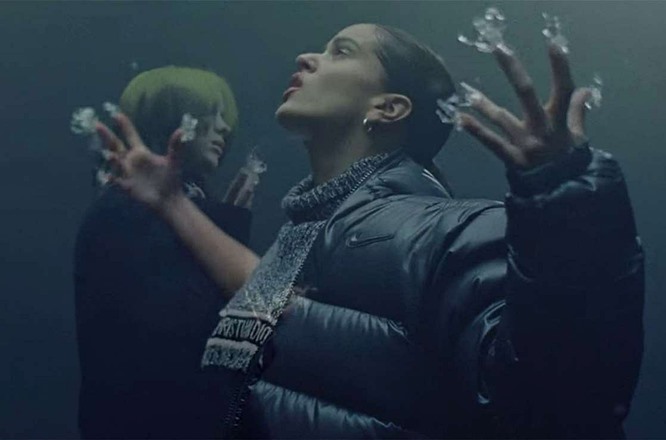 One of the songs guaranteed to be an enormous success in 2021 is the new collab release — Billie Eilish and ROSALÍA’s ‘Lo Vas A Olvidar‘, which hit the airwaves and digital services last week.

That track was also played on the just released Euphoria, Season 1 Special, ” F*ck Anyone Who’s Not a Sea Blob” that is currently airing on HBO.


The moody song was heard on the episode as we saw the flashbacks with Rue.

Billie Eilish and ROSALÍA’s ‘Lo Vas A Olvidar‘ was released by two of the world’s current biggest pop stars — one American, one Spanish — early last week.

The highly synthesized track was quite a surprise when it was released, as there were few hints that Eilish and ROSALÍA were collaborating on a new song. Until, of course, suddenly they had.

The quite basic dark, dream-like and moody ‘Lo Vas A Olvidar‘ features both artists singing mainly in Spanish, a language that has to be one of the most beautiful languages for any piece of music. (continue reading and listen to Billie Eilish and ROSALÍA’s ‘Lo Vas A Olvidar‘ from Euphoria after the promo for another of ROSALÍA’s amazing collabs…)

Rosalía and Ozuna’s ‘Yo x Ti, Tu x Mi’ is catchy AF and check out the cool music video

The song’s music video also has both singers on an almost dark stage with a single light shining on them as they swayingly dance and sing.

The music video was directed by Nabil. It currently has almost 21.5 million views on YouTube and over 1.7 million thumbs up. Yep, fans like it.

‘Lo Vas A Olvidar‘ was produced by Billie Eilish’s brother Finneas, the usual producer on most of her songs. It is also one of the songs featured on the just released Euphoria Part Two: Jules soundtrack.

Listen to Billie Eilish and ROSALÍA’s ‘Lo Vas A Olvidar‘ (aka ‘You Will Forget It‘) in the official music video and on the player. The song currently has more than 5.125 million streams on Spotify.