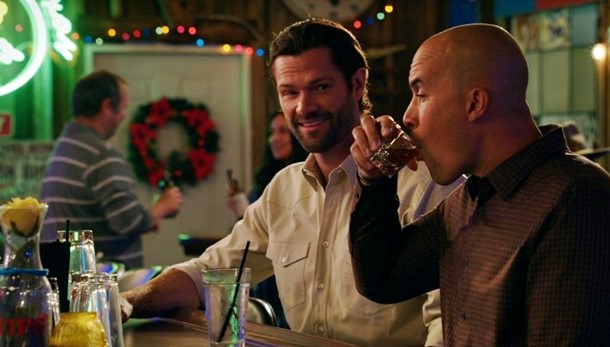 The song was playing as Angie bumps into Colton.

Black Tie Dynasty’s ‘Christmas Time‘ is from the Fort Worth, Texas based band’s fourth EP I Like U, which came out in 2006 via Idol Records.

The track itself has a 1980s British alt. rock sound in both music and vocals.

Black Tie Dynasty was an alternative rock band founded in Fort Worth in the early 2000s.

The band released their debut EP via Idol Records in 2004, followed by three other EPs over the next couple of years, before they broke up in 2010.

Thankfully, band members didn’t get out of the music business entirely though.

Lead singer Cory Watson and keyboardist Brian McCorquodale went on to found indie band Mon Julien, drummer Eddie Thomas has played drums with The Crash That Took Me since the break up, and bassist Blake McWhorter joined These Machines Are Winning.

Listen to Black Tie Dynasty’s ‘Christmas Time‘, as heard on this week’s episode of Walker, on their I Like U EP, and in the video down below.

The song itself is hella catchy, with superb drums and cool vocals, and should have received a lot more attention than it did upon release.