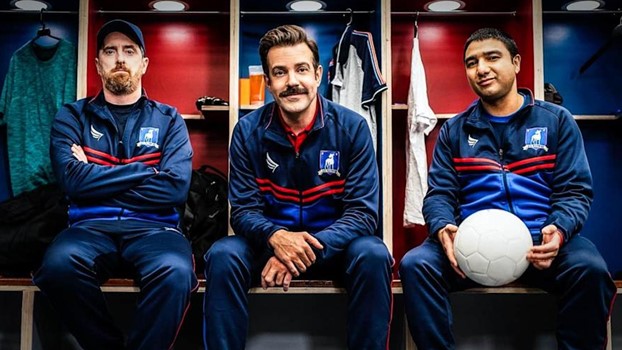 The track was heard as Isaac is playing football on Roy’s home pitch.

Blur’s ‘Song 2‘ is from the iconic alternative rock band’s self-titled fifth studio album, which was released in February, 1977 via Food Records.

It charted in a slew of countries, including the U.S., the UK, Australia, Ireland and Belgium, and was eventually certified Gold in Australia and Platinum in the UK and Italy.

Since its release, it has become one of the most recognizable Blur tracks — although it is also often mistakenly known as ‘Woo Hoo‘.

The song has also been used on the soundtracks of movies like Central Intelligence and Charlie’s Angels, and on TV shows like the UK’s Top Gear, Yellowstone and Parks & Recreation.

Listen to Blur’s ‘Song 2‘ as heard on Ted Lasso last night in the song’s official music video, and on the band’s sixth album.

Ted Lasso, by the way, has become a sleeper hit for Apple TV+.

A fabulous result for this cool sports-related show that started life as a series of commercials for  NBC Sports’ coverage of Premier League soccer. (watch one below)

That is, until viewers loved it so much, a TV series was written based on them.

You can watch Ted Lasso on Apple TV+.