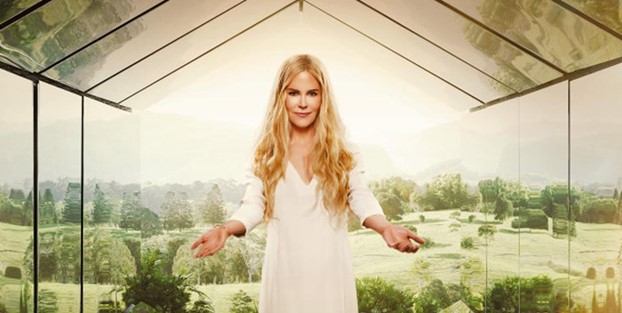 It was the track playing while Zach and Zoe are hugging, and as the Marconis are coming out of the woods.

Bon Iver’s ‘Michant‘ was released on the band’s 2011 self-titled second studio album. A lovely, ethereal sounding album full of songs that are heavy on the emotions while, in some strange way, also feeling quite uplifting.

The Bon Iver album was released to enormous critical acclaim, sold well over half a million copies in the United States alone and won the Grammy Award for Best Alternative Music Album the following year.

According to Justin Vernon, Bon Iver‘s founder and lead vocalist, he wrote the tracks for the album about different places around the world.

For instance, the first track ‘Perth‘ was written because Vernon was with the late actor Heath Ledger’s best friend when he discovered Ledger had died of an accidental drug overdose. Ledger himself was from Perth, Australia.

Listen to Bon Iver’s ‘Michant‘ as heard on Nine Perfect Strangers in the song’s music video, and on the band’s self-titled studio album below.

It is the second time the track was featured on the show, having already been played earlier in the series on Episode 3.