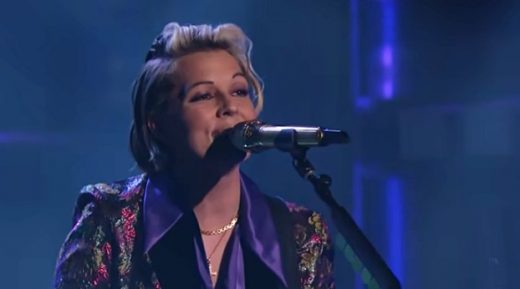 Alternative folk rock singer Brandi Carlile’s ‘Right on Time’ was heard on the soundtrack of This Is Us last night — This Is Us, Season 6, Episode 2, “One Giant Leap“.

The track was the lead single from Carlile’s seventh studio album In These Silent Days, which came out last year via Elektra and Low Country Sound, and went on to chart in seven countries.


And, when it comes to ‘Right on Time‘, it would be difficult to get more attention from those who matter in the music world.

After all, the song was nominated for three Grammy Awards.

Commercially, ‘Right on Time‘ wasn’t as successful, however, although the track did chart on three American music charts, with its highest ranking at #43 on the Hot Rock & Alternative Songs chart.

The track also came with a music video featuring Carlile leaving a concert stage and singing the song behind the scenes.

She then walks out of the concert hall into a crowd of people, and later into a field and then underwater. Interestingly, forcing Carlile to face her lifelong fear of being in water.

At the end of the video, she ends up back at the concert venue smiling.

Listen to Brandi Carlile’s ‘Right on Time’ as heard on This Is Us in the video, and on her In These Silent Days album.

She also performed the song beautifully live on The Tonight Show, which you’ll find down below as well.