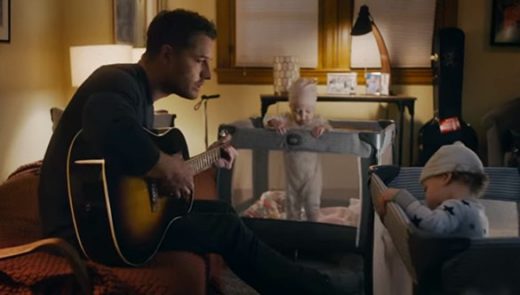 Bread’s ‘The Guitar Man‘ was used to musically illustrate the title of this week’s episode of This Is Us last night — This Is Us, Season 6, Episode 8, “The Guitar Man“.

The now classic Bread soft rock track was released by the American rock band in 1972 as the title track and lead single from their fifth studio album.

The song also charted in four other countries — Canada, Ireland, Australia and New Zealand — but was not a huge hit for the band at the time of its release.

Surprising nowadays, considering what an iconic Bread song it has since become.

Band members David Gates, Jimmy Griffin, Mike Botts and Larry Knechtel got back together in 1976 to record their last album Lost Without Your Love, but soon lost the impetus to record and tour, so broke up again at the end of the following year.

Bread had another brief reunion in 1996, when they participated in a very successful “25th Anniversary” tour, but broke up permanently after the tour ended.

Listen to Bread’s ‘The Guitar Man’ from last night’s This Is Us in the video, and on the band’s Guitar Man album.

It is one of a number of Bread songs that are now considered classic rock songs of the 1970s.