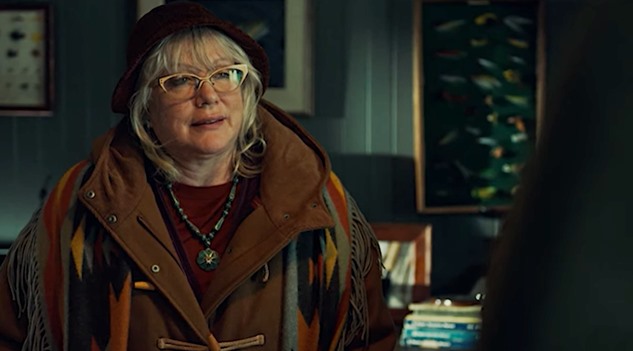 The quintessential 60s song was playing as Ann-Marie (Julia Sweeney) gives Shadow Moon (Ricky Whittle) a ride into town. A song that really added atmosphere to that cool scene.

Burt Bacharach’s ‘(There’s) Always Something There To Remind Me‘ was written by Bacharach and writing partner Hal David in the early 1960s.

It was meant to be a release hit for Bacharach/David favorite Dionne Warwick, but it was soul singer Lou Johnson’s version of the song that eventually hit the American charts.

Probably the most well-known version of the song, other than Warwick’s and Johnson’s, and at least for British music fans, was the one released by English singer Sandie Shaw at the end of 1964.

That version made it to the top of the charts in the UK, Canada and South Africa, but only charted at #52 in the U.S. on the Billboard Hot 100 chart.

To this day, the track is instantly recognizable as a Bacharach/David number, and is just one of the duo’s songs that have been licensed for play on hit TV shows.

Listen to Burt Bacharach’s ‘(There’s) Always Something There To Remind Me‘ the Dionne Warwick version in the video and on the Spotify player.

Season 3 of American Gods is now airing on Starz.

The hit TV series has already been nominated for several Emmy Awards, as well as various awards at the Critics’ Choice Television Awards. Although the third season has mixed reviews from critics and fans alike.

Listen to Lady GaGa and Ariana Grande’s ‘Rain On Me’ from Shameless, Season 11, Episode 7