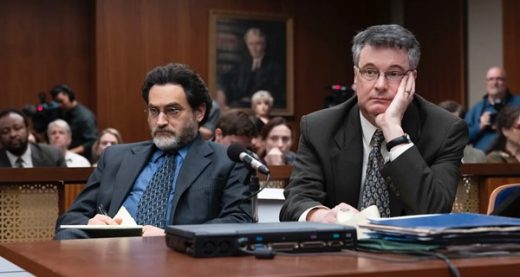 The track is from the band’s self-titled 1986 album, which came out on the Pitch-a-Tent record label and charted at #7 on the UK Indie chart.

The album is known as an experimental music-style release, with a whole plethora of strange and interesting things going on in its tracks.

Camper van Beethoven’s ‘Good Guys and Bad Guys‘ is a silly song whose lyrics are hard to pin down, as it seems to say America is a great place to live in, while also making fun of Americans who think that it is.

Listen to Camper van Beethoven’s ‘Good Guys and Bad Guys‘ as heard on The Staircase this week on the band’s 2008 compilation album Popular Songs Of Great Enduring Strength And Beauty, and in the video.

The Staircase tells the story of novelist Michael Peterson who was convicted of murdering his wife Kathleen in 2001.

It is currently streaming on HBO Max.