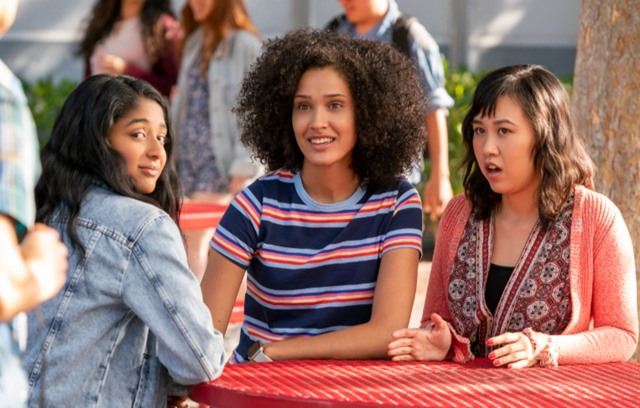 American indie electro pop trio Cannons’ ‘Fire For You‘ was featured on the new Netflix comedy Never Have I Ever this week — Never Have I Ever, Season 1, Episode 8, “…pissed off everyone I know” (streaming from April 27th, 2020).

The track was played as Paxton kissed Devi.

Cannons’ ‘Fire For You’ is a stand-alone single the trio released earlier this year on the AntiFragile Music record label.

The three combine house, electro-funk and some damn cool grooves along with Joy’s ethereal vocals to produce addictive music that sticks with you long after its over.

Cannons released their debut studio album Night Drive in 2017, and then followed that up with last year’s EP Shadows.

The mellow ‘Fire For You‘ is one of several tracks the trio has had featured on hit TV shows in the last couple of years — shows like BH90210, The Magicians, Are You The One? and Ex on the Beach.

As for Never Have I Ever, the new series was written by Mindy Kaling and Lang Fisher, and looks like set to be another smash hit for the prolific Kaling.

It stars Maitreyi Ramakrishnan, Darren Barnet, Ramona Young and Lee Rodriguez. The first season of the new series is now streaming on Netflix.

You can listen to Cannons ‘Fire For You’ as featured on Never Have I Ever in both the video and Spotify player below.