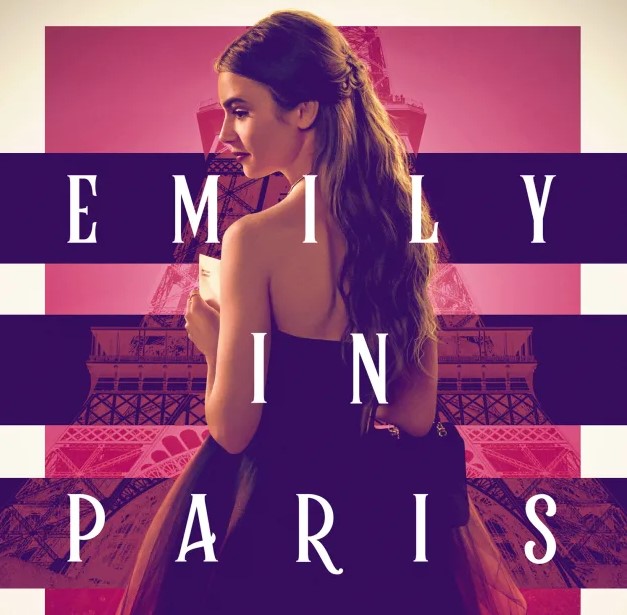 Brooklyn-based singer songwriter Cavale’s ‘Burst into Flames‘ is that addictive electropop song that showed up on the 10th episode of the new Netflix series Emily in Paris this week — Emily in Paris, Season 1, Episode 10, “Cancel Couture“.

The song was played during the scene when Emily kisses Gabriel goodbye.

Cavale’s ‘Burst into Flames‘ is a recent stand-alone single released by the indie singer. It is also one of two songs she currently has featured on Emily in Paris — the other being the equally addictive ‘Pretty Boy‘, which showed up in episode 4.

While Cavale’s music definitely helps make the show, however, the show itself is vacuous. (Sorry, but I had a helluva time even getting through it, the whole thing is so clichéd and dull).

Mount has been living in Brooklyn, NY since 2013 where she concentrates on creating what she calls a ‘self-possessed electropop sound, centered around a sensual yet dynamic vocal’.

In recent years, she has also had some of her songs featured on hit TV series like Younger, and in the movie The Incredible Jessica James.

While Cavale has yet to release a debut EP or album, she does have several songs streaming on Spotify you can listen to if you enjoy her sound.

Meanwhile, listen to Cavale’s ‘Burst into Flames’ from Emily in Paris in both the video and music player below.

Emily in Paris stars Lily Collins and is currently streaming on Netflix. Although, unless you like a dull series full of designer clothes nobody could afford on Emily’s salary, and with scenes that don’t even remotely convey the real Paris, I’d say skip it, and just listen to Cavale’s music instead.