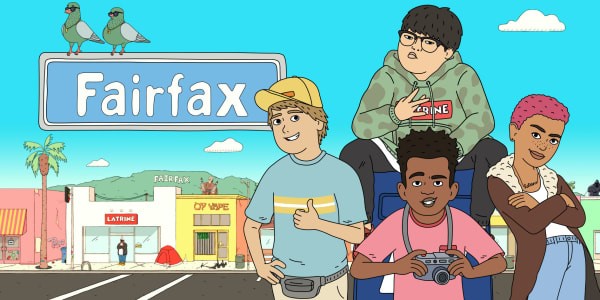 Fairfax, the new Amazon Prime animated comedy about the desperation involved in trying to be ‘cool’, is actually pretty depressing. Especially when, while it makes fun of today’s younger generation’s obsession with getting attention for worthless external things, still seems to be praising it.

That being said, while Fairfax isn’t one of my favorite new shows this season, there is no denying it comes with one of the season’s best soundtracks.

Featuring music like Childish Gambino’s ‘This Is America‘ on its pilot episode — Fairfax, Season 1, Episode 1 — during the scene where the Latrine clothing drop is announced, the show starts off pretty damned stellar in the music department at least.

Childish Gambino’s ‘This Is America‘ was released by the American rapper in early 2018, and features background vocals by a number of big deal rappers including Young Thug and 21 Savage.

The track is a treatise on American gun violence, especially as it pertains to racism. Yes, it is a typical left-wing diatribe against guns (not that I don’t agree to some extent), but the song itself is still a banger.

A massive hit for Childish Gambino, ‘This Is America‘ also came with a music video featuring various people being shot (no, the imagery is not subtle), and even a scene where children record the violence around them on their phones.

Yep, society’s obsession with recording events instead of experiencing them, just so those events can be shown to others in an attempt to make the recorder ‘famous’, is also dissed. And rightfully so.

‘This is America‘ hit #1 in several countries, and eventually won the rapper four Grammy Awards. Now it’s being used on a show dissing current social norms.

Listen to Childish Gambino’s ‘This Is America‘ as heard on Fairfax in the song’s music video, and on the Spotify player.

And you have to laugh at the irony of Amazon with Fairfax, while simultaneously promoting a story that wanting to be ‘cool’ and wearing the ‘right things’ is bad, they are also selling a shit-ton of expensive Fairfax-themed clothing and mobile accessories to viewers.

Does fuck you, Amazon, sound about right?