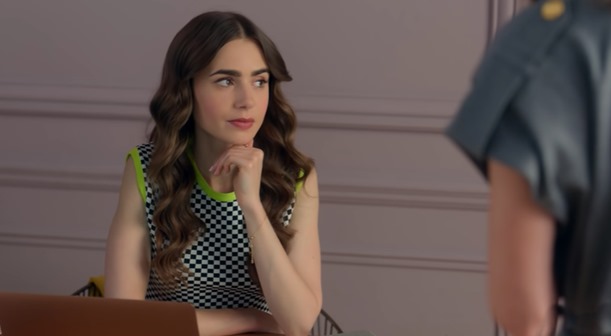 French synth pop singer Corine’s ‘Marche Nocturne‘ was one of the tracks played on Emily in Paris on the show’s new season this week — Emily in Paris, Season 2, Episode 1.

The upbeat 1970s style dance track was played as Emily is at the club.

Corine’s ‘Marche Nocturne‘ was released in December, 2016 via Kwaidan Records.

Corine herself is relatively new on the French electro pop scene, with a couple of EPs and a debut album — Un Air de Fête — currently out.

Her latest single ‘Brillando‘ came out earlier this year.

Related: Listen to more cool music from Emily in Paris on Leo Sigh

She has also ventured out of France, however, — at least before European governments’ reactions to Covid-19 shut down most of the music industry on the continent — with performances in Japan, Portugal, Spain and even Russia.

Let’s hope once European governments get over their hysteria about the virus, she will be able to head back out and pick up where she left off, as her music is very cool.

Meanwhile, listen to Corine’s ‘Marche Nocturne‘ (‘Night Market‘ in English) from the new season of Emily in Paris down below.