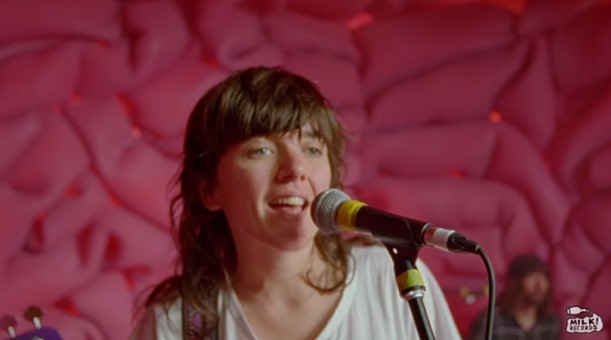 One of the most well-loved historical-ish dramas Dickinson continued on its way this week, with yet more superb songs on its soundtrack.

Including the now-iconic Australian indie singer songwriter Courtney Barnett’s ‘Everybody Here Hates You‘, which was played on Dickinson, Season 3, Episode 5, “Sang from the Heart, Sire” over the end credits.

Barnett’s ‘Everybody Here Hates You‘ is a single that was released by the Aussie singer in April, 2019 via Milk! Records, Marathon Artists and the Mom+Pop label.

It came out exclusively for Record Store Day, along with the B-side ‘Small Talk‘.

‘Everybody Here Hates You‘ is a typical Courtney Barnett song, with its almost dead-pan, monotone vocals.

A sound that is so distinctive, it helped the singer’s debut studio album — Sometimes I Sit and Think, and Sometimes I Just Sit — go viral all over the world, and become a huge hit in many. Well her voice and her superbly written songs.

Barnett’s ‘Everybody Here Hates You‘ is sung from the perspective of someone who feels they are so worthless, nobody likes them.

As Barnett herself commented about the song — “PS. everybody here does not hate you. please reach out to somebody you trust or Google your nearest mental health support lifeline if you need to talk to someone x.”

Listen to Courtney Barnett’s ‘Everybody Here Hates You‘ from last night’s Dickinson in her official music video for the song, filmed alongside her band, and on the Spotify player.