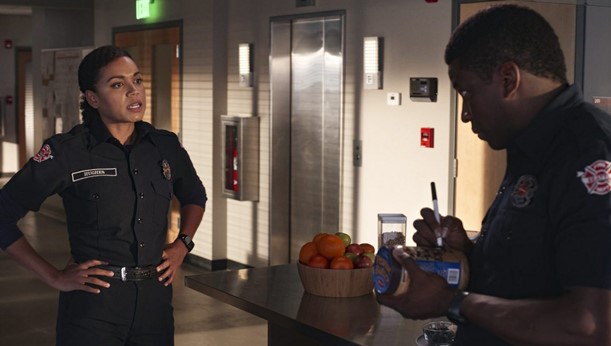 Michigan native singer songwriter and music producer Daniel Wilson’s Near Me‘ was played on Station 19 last night — Station 19, Season 5, Episode 5, “Things We Lost in the Fire” — aired on November 11th, 2021.

The track was played during the scenes after the gas explosion as Warren and Gibson are in the ambulance with Dean Miller.

Daniel Wilson’s ‘Near Me‘ was self-released as a single by the singer in 2020.

It follows on from his EPs Young Rubbish, Boy Who Cried Thunder and Sinner of the Week, as well as several other singles.

Daniel Wilson himself is a former church gospel singer who decided to move beyond gospel to create music that is more electro pop or electro R&B.

Since then, he has seen his music gain a huge amount of traction, being featured in hit shows like Grey’s Anatomy, How To Get Away with Murder, The Republic of Sarah, All America, Catfish: The TV Show and now Station 19.

Listen to Daniel Wilson’s ‘Near Me‘ as heard on Station 19 last night on Spotify and YouTube below.

The song itself is incredibly beautiful and incredibly sad, but also hopeful, and a wonderful choice for that Station 19 scene. Wilson’s vocals are stunning.