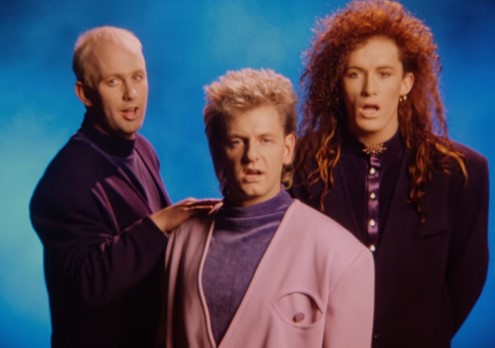 British pop band Dead or Alive’s ‘You Spin Me ‘Round (Like a Record)‘ was played on the Netflix horror drama Stranger Things this week — Stranger Things, Season 4, Episode 2, “Chapter Two: Vecna’s Curse“.

The song was played as Mike, Will and El are roller skating.


Dead or Alive’s ‘You Spin Me ‘Round (Like a Record)‘ was released in 1985, and became a big hit for the indie British pop band. Particularly once it was put in heavy rotation (ie: played every hour) on alternative radio stations across the United States.

The radio station I was a DJ at had Dead or Alive’s ‘You Spin Me ‘Round (Like a Record)‘ playing so much, I was so sick of it by the end of the first week, I could have quite happily stomped on the vinyl album and cracked it. (Although, I did grow to love it once it hit the nightclubs, as it is a helluva cool song to dance to).

Other people also loved the song so much that Dead or Alive’s ‘You Spin Me ‘Round (Like a Record)‘ went on to chart high up the charts in 17 countries, with the song making it onto four separate charts in the U.S.

Not bad for a band few people had heard of before then.

Since then, ‘You Spin Me ‘Round (Like a Record)‘ has also shown up on a plethora of critics’ lists as one of the best songs ever released.

Hell, I’ll agree with that.

Listen to Dead or Alive’s ‘You Spin Me ‘Round (Like a Record)‘ as heard on Stranger Things on the band’s Youthquake album, and in the song’s official music video.

You can also listen to a ton of other songs from Stranger Things on Leo Sigh.