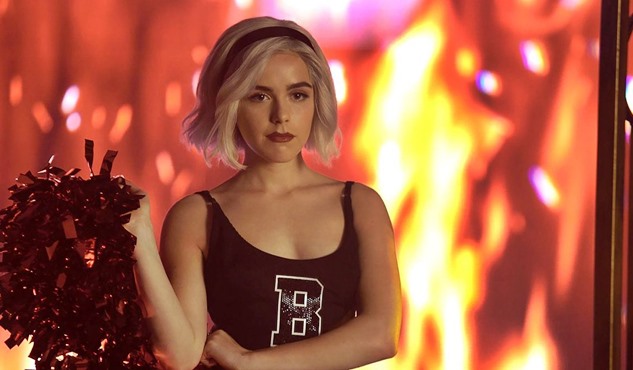 American heavy metal band Disturbed’s ‘Down with the Sickness’ is featured on the latest season of Chilling Adventures of Sabrina – the final season of the supernatural horror series that has just premiered on Netflix.

The track was heard as Agatha and Mrs. Wardell ask about the next terror coming to Greendale and Father Blackwood talks about Perverse.

‘Down with the Sickness‘ is the second single from Disturbed’s debut studio album The Sickness.

The song was not only critically acclaimed by several heavy metal critics, it was also a big success for the band at the time.

‘Down with the Sickness‘ charted in the U.S. in the Top 10 on three different music charts, with its highest position at #4 on the Bubbling Under Hot 100 Singles chart.

The song was also certified Platinum in the U.S. and Silver in the UK.

The heavy metal track has also been so liked by music supervisors, along with Chilling Adventures of Sabrina, it has been licensed for use on shows like South Park, Superstore, CSI: Miami, American Dad!, Teenage Bounty Hunters, Brooklyn Nine-Nine and ER, and on movies as diverse as Queen of the Damned, Dawn of the Dead and Green Street Hooligans. (continue reading after the promo…)

The band Disturbed was originally founded in 1994 and performed and recorded music until 2011, when band members decided to take a break.

They regrouped in 2015 and, since then, have released two more albums for a total of seven, as well as seven new singles, including one in 2020.

‘Down with the Sickness‘, however, remains the band’s most popular songs and is usually performed in every concert.

Listen to Disturbed’s ‘Down with the Sickness’ as featured on Chilling Adventures of Sabrina in the band’s official music video for the song and on their debut album The Sickness.