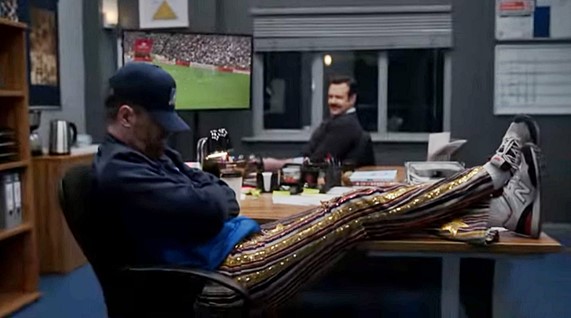 Edwyn Collins’ ‘A Girl Like You‘ is the biggest hit the Scottish singer songwriter and record producer has ever had. To the point that the song is instantly recognizable to the vast majority of people that hear just the first few bars.

So, when Edwyn Collins’ ‘A Girl Like You‘ showed up on Ted Lasso last night, a huge smile came across my face as, man, wasn’t that just perfect.


The song, by the way, was played as Beard and the lads are at the Bones & Honey nightclub patrolling the room.

‘A Girl Like You‘ was released by Collins in 1995 as a single from his third studio album Gorgeous George.

The guitar-driven soul track immediately catapulted to the top of the charts in Belgium and Iceland, and then charted high in 17 other countries.

In the United States, ‘A Girl Like You‘ ranked high on four charts, with its best showing at #7 on the Alternative Airplay chart.

It was ultimately certified Gold in Australia and Germany, and Silver in the United Kingdom and France.

Listen to Edwyn Collins’ ‘A Girl Like You‘ as heard on Ted Lasso in the song’s cool official music video, and on the Scottish singer’s album Gorgeous George down below.