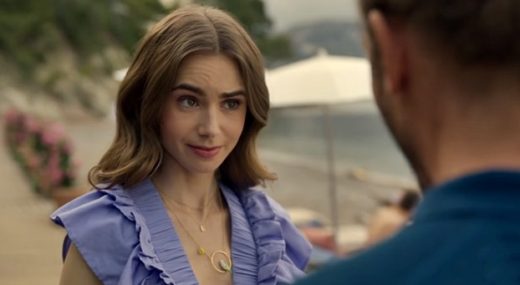 One of my favorite independent films of the last 20 years is the Irish film Once. A movie I watched three times back to back, not only because of the sweet story about two struggling Dublin musicians but primarily because the songs on its soundtrack were so good.

One of those songs, Marketa Irglova and Glen Hansard’s ‘Falling Slowly’ showed up on the soundtrack of Emily in Paris this month — Emily in Paris, Season 2, Episode 6, “Boiling Point” — including being sung by the cast. (Don’t you hate it when TV shows do that?)

A song, by the way, that was the surprise winner of an Academy Award for Best Original Song back in 2008.

‘Falling Slowly‘ is one of a superb number of songs from the Once soundtrack. All of which, other than one, were written by Glen Hansard, with Marketa Irglova co-writing six of them.

Although every song was gorgeous in its own way, ‘Falling Slowly‘, with its sweet melody and lyrics, Hansard and Irglova’s soft, gentle vocals, and the feelings of hope so many people often need was the stand-out song from the film.

No surprise then the track has been covered by artists like Il Divo, Josh Groban and by several others on televised talent shows since. It really is lovely.

Listen to Marketa Irglova and Glen Hansard’s ‘Falling Slowly’ as heard on Emily in Paris in the music video for the song, which features scenes from Once, and on the film’s soundtrack below.

And, if you haven’t seen Once, do that as soon as possibly as, if you care about music and musicians at all, it is one of the best films made on the subject.

As for Emily in Paris, unfortunately, the music used on its soundtrack is the truly awful show’s only saving grace. If you must watch this utter piece of drivel, the show is streaming on Netflix.