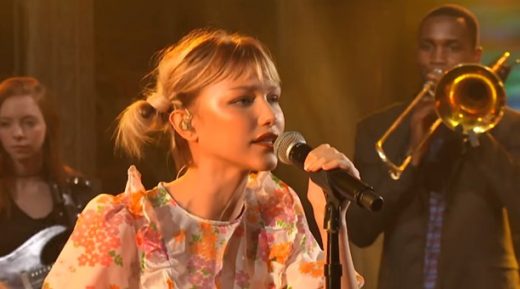 The emotionally powerful song was heard playing over the end credits.

And, if you think you have heard the song somewhere before, you have.

That’s because Grace VanderWaal’s ‘Clearly‘ is a song that uses the original lyrics written by Nash Johnny, and the ‘I Can See Clearly Now‘ song that was originally released by him, and then adds to all of it with additional verses and changed melodies.

It was also a follow up to the Johnny Nash version of the song being played earlier in the show. (Listen to that below as well).

And, yes, to me, this version of the song is much more powerful, albeit much sadder, than its original.

Released as a single in 2018 when VanderWaal was just 14-years-old, the singer also gave a live performance of the song on The Late Show that blew critics away.

You should watch that below, as it’s quite astounding.

You can also listen to Grace VanderWaal’s ‘Clearly‘ as heard on And Just Like That… on the song’s official music video, and on the Spotify player.

Listen to more songs from the first season of And Just Like That… on Leo Sigh.