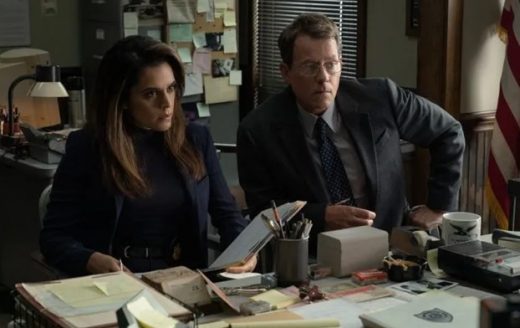 The song was heard at the bar as Brian and Lauren are talking about investigating the missing girls.


Harvey Danger’s ‘Flagpole Sitta‘ was the Seattle, Washington-based rock band’s debut single and was released in April, 1998 although the song was recorded two years previously.

It also came out on Harvey Danger’s debut studio album Where Have All the Merrymakers Gone?, and was an almost immediate commercial success.

‘Flagpole Sitta‘ went to #3 on the U.S. Alternative Airplay chart, and to #31 on the Adult Top 40 chart. The power pop track also charted in six other countries, even hitting #57 on the UK Singles chart.

Nowadays, almost 25 years after its release, ‘Flagpole Sitta‘ often shows up on alternative radio stations in the U.S., although many who hear it, while immediately recognizing the song, probably couldn’t have named the song or the band if they hadn’t been told.

That’s how obscure Harvey Danger was to many music fans unfortunately.

Listen to Harvey Danger’s ‘Flagpole Sitta‘ from last night’s episode of Black Bird in the track’s music video, and on the  Spotify player down below.

Sadly, for the band, they broke up permanently in 2009. A bit of a tragedy, as so much of their music was as superb as this.

And is it just me, or is everyone’s favorite lyric from ‘Flagpole Sitta‘ “I’ve been around the world and only found that stupid people are breeding“.

Listen to more music from Black Bird on Leo Sigh. Black Bird itself is currently streaming on Apple TV +. New episodes come out every Friday.