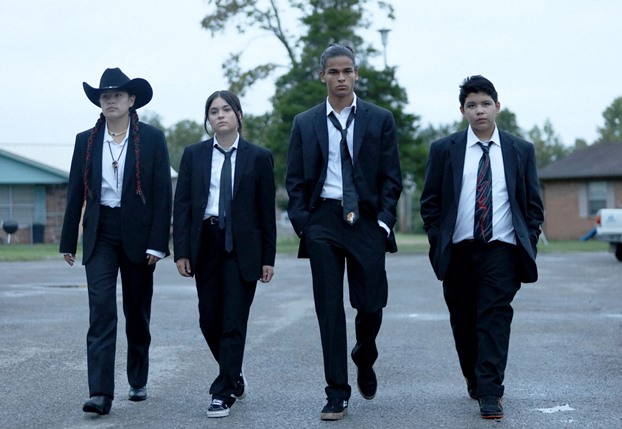 The song was heard at the end of the episode as Elora (Kawennáhere Devery Jacobs) drops off Coach Bobson (Bill Burr). It continued playing over the end credits.


The track is from Tovar’s self-released studio album Another Time, Another Place, which came out earlier this year.

‘Cleveland Summer Nights‘ is the first music the Oklahoma-based musician has had featured on a hit TV series.

It is not surprising the song was chosen for Reservation Dogs, however, as not only is most of the series filmed in Oklahoma, Tovar’s songs are so rich and polished he sounds like he has been creating country music for 50 years.

With that in mind, I’d say expect to hear his music showing up on TV shows and movies a lot more in coming years.

Jacob Tovar’s official website talks about his music this way:

He sings impactful country standards, and writes and performs original tunes that carry stories with which everyone can relate.  His timeless crooning honkytonk vocals can haunt and enchant all in the same phrase, while his riveting guitar playing frames each melody with a spark of distinction.

Listen to Jacob Tovar’s ‘Cleveland Summer Nights‘ as heard on last night’s Reservation Dogs in the video, and on his Another Time, Another Place album down below.

If you enjoy the song, which you must or you wouldn’t be here, I also suggest you listen to his entire album as it features 11 other tracks that are equally as good.

As for Reservation Dogs, it was announced earlier this month the FX on Hulu show has already been greenlit for a second season.