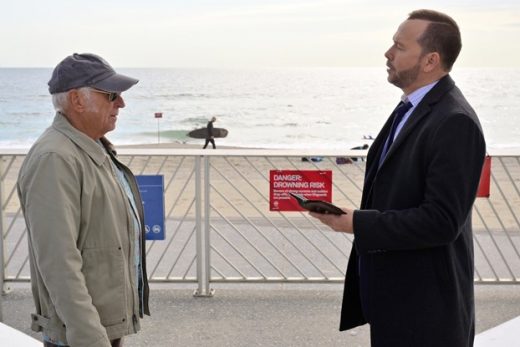 The song was heard as Jimmy Buffett himself confronts the con artist.

Buffett’s ‘Margaritaville‘ was released in 1977 on the country rock, calypso singer’s seventh studio album Changes in Latitudes, Changes in Attitudes.

Jimmy Buffett’s ‘Margaritaville‘ was even more successful for the singer.

The song made it to #1 on the Hot Adult Contemporary Tracks chart, #7 on the Cash Box 200 chart and #13 on the Hot Country Singles chart.

It also charted high in Canada, Australia and New Zealand.

The easy listening, holiday and summer-vibed song has since become a classic, appearing on the lists of many critics’ Best Songs of…, as well as being inducted into the Grammy Hall of Fame.

‘Margaritaville‘ is one of those songs that just makes you happy to hear it.

Listen to Jimmy Buffet’s ‘Margaritaville‘ from last night’s Blue Bloods on his Changes in Latitudes, Changes in Attitudes album, and in the video.

There is also a live performance Buffet gave of the song that’s very cool and definitely worth a listen.