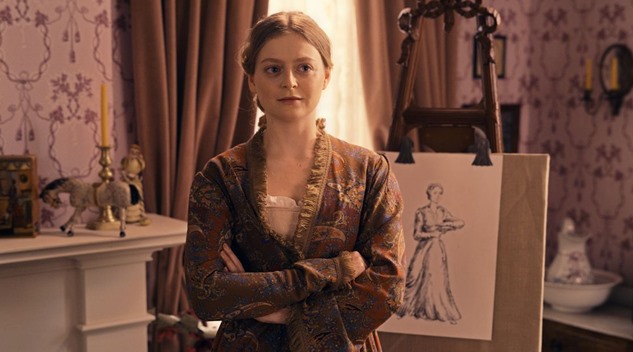 American singer songwriter Joy Downer’s ‘The Fool‘ was one of the awesome songs featured on the soundtrack of this week’s episode of the drama series Dickinson — Dickinson, Season 2, Episode 9, “I Like a Look of Agony“.

The track was played as Emily is on the floor of her room and starts thinking about Sue with Sam.

Joy Downer’s ‘The Fool‘ is from the Utah native’s nine-track debut album Paper Moon, which she self-released last year.

The song has an insistent, addictive beat, a sweet, danceable melody and Downer’s vocals, which are slightly ethereal but also massively and gorgeously powerful.

‘The Fool‘ is one of a handful of songs the indie artist has had features on hit TV series so far, with other songs licensed for play on Siesta Key and on the Netflix series Spinning Out.

As for Downer, she was brought up as a Mormon but unofficially left the church when she decided to pursue a music career.

There is an interesting interview with her that was published in Talkhouse last year, with the singer explaining why she isn’t remotely angry about being a Mormon and doesn’t hold any animosity towards the church.

It’s just that, being a Mormon, isn’t conducive to what she wants to achieve in her life.

Listen to Joy Downer’s ‘The Fool‘ as played on Dickinson in the video and on her album Paper Moon.