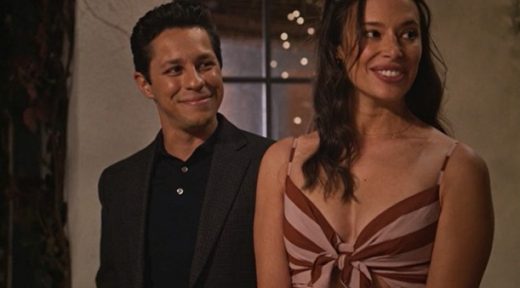 The song was played during the housewarming that turned into an engagement party.


Jungle’s ‘Keep Moving‘ is the lead single from the duo’s third studio album Loving in Stereo, which came out in August, 2021 via their own label Caiola Records and AWAL.

The album went on to chart in 12 countries, but was particularly successful in the UK and the United States.

In the UK, Loving in Stereo hit #1 on the Independent Albums chart, and #3 on the UK Albums chart.

In the U.S., the album charted on five different charts, hitting #1 on the Top Dance/Electronic Albums chart, and #15 on the Top Alternative Albums chart.

Jungle’s ‘Keep Moving‘ is one of the band’s biggest hits so far.

The track also has a hit music video that has a woman standing outside an abandoned building alone, until she walks inside and joins a group of dancers having a helluva lot of fun.

‘Keep Moving‘ also just showed up on the new Netflix series Man vs Bee among many other hit shows, just in case you thought you recognized it when it played on Maggie.

Listen to Jungle’s ‘Keep Moving‘ from Maggie in its music video, and on the band’s Loving in Stereo album and, of course, listen to more songs from the Maggie soundtrack on Leo Sigh.