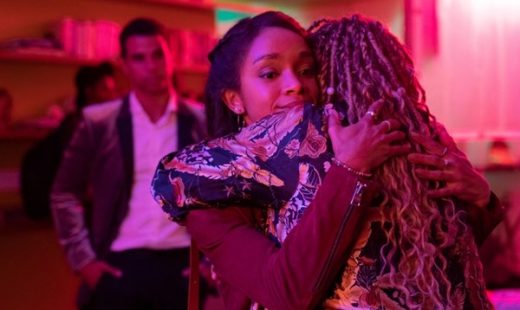 British electronic music duo Letherette’s ‘Woop Baby‘ was one of the many many superb contemporary songs played on the soundtrack of the third season of the gay teen drama Love, Victor — Love, Victor, Season 3, Episode 1, “It’s You“.

The cool song was heard playing at the house party as Mia (Rachel Hilson) notices her mother Naomi (Tracie Thoms).

Letherette’s ‘Woop Baby‘ was released on the duo’s 2018 full-length album Brown Lounge, Vol. 4, which came out via the Wulf Records label.

As for Letherette, it comprises Richard Roberts and Andrew Harber, who got together as musical partners in 2009 and released their debut EP a year later.

Since then, the pair have released released four more EPs and their debut album under the Letherette name.

The pair are based in Wolverhampton in the UK.

Listen to Letherette’s ‘Woop Baby‘ as heard on the latest season of Love, Victor on their Brown Lounge, Vol. 4 album, and in the video below.