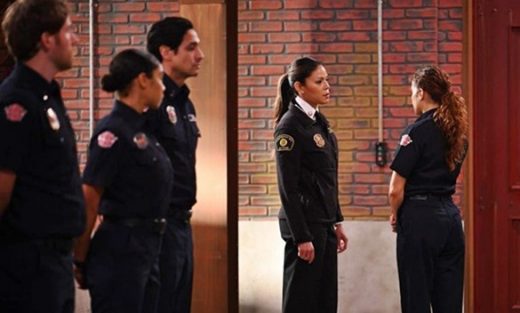 The song was heard playing as everyone is working out.


Nathaniel Rateliff & The Night Sweats’ ‘Survivor‘ is from the band’s third studio album The Future, which was released in late 2021 via the Stax record label.

Nathaniel Rateliff performs with both his backing band The Night Sweats and solo, so The Future is actually his seventh studio album.

‘Survivor‘ came with a black and white music video that follows an out-of-shape boxer who is forced to get back into shape by various trainers, until he gets in the ring with his opponent and is knocked out in one punch.

The song itself, however, is telling listeners you don’t have to be ‘a great survivor’ to enjoy a good life.

You just have to accept there will sometimes be problems, and move through them without expecting any ‘great victory’.

Listen to Nathaniel Rateliff & The Night Sweats’ ‘Survivor‘ from Station 19 in that music video, and on the band’s The Future album.

The song itself is a mellow track with an addictive melody that worms its way into your brain, and an absolutely gorgeous horn section. All made even better by Rateliff’s amazing voice.