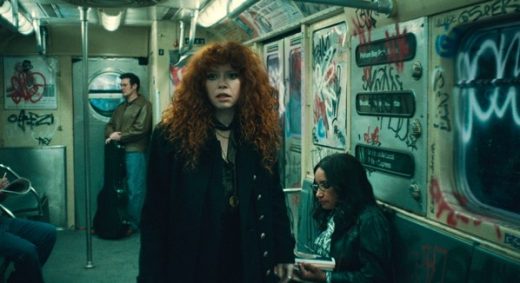 The song was played as we see Nadia arriving in Budapest.


Nena’s ‘99 Luftballons‘ is a song that was released in 1983 as a single from the band’s self-titled debut album.

Despite being sung in German, the track became a huge hit in Europe, the UK, Australia, New Zealand and Japan.

An English version of the song — ‘99 Red Balloons‘ was then released, which also became massively successful for the previously unheard of band.

It charted at #1 in Australia, Canada, Ireland and the UK, and then became a cult classic in the U.S., becoming one of the most requested songs on alternative music stations and college radio stations around the country.

Interestingly, however, once both were released, most Americans preferred the German language version of the song.

So much so that, at the alternative radio station where I was a DJ, around 90% of the huge number of requests we received were for the German and not the English song.

Nena themselves said they felt like the English lyrics didn’t hold the same seriousness as the original German ones and, to some extent, sounded stupid.

For me, I just feel the anti-war emotions of the song hold more weight in German than in English.

Listen to Nena’s ‘99 Luftballons‘ on the band’s first album, and in the song’s music video.